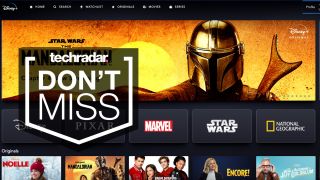 For the Cyber Monday deals period only, you can sign up to a year of Disney Plus for just $59.99 as part of a limited time offer. That's $10 less than the normal annual price of $69.99, and since Disney Plus only launched last month, that's a deal worth pouncing on if you like the look of the video streaming service. This deal is only available in the US and Puerto Rico, and it expires at 11.59PM ET today, December 2. If you want it, act fact.

Disney Plus launched to 10 million subscribers, and it brings together movies from Disney, Pixar, Marvel, Star Wars and more, along with original programming like The Mandalorian, the first live-action Star Wars TV show. If you want to see what the big deal over Baby Yoda is, jump in now:

Disney Plus annual subscription: $59.99
For today only, save $10 on Disney Plus. This is the first ever deal we've seen for Disney's new streaming service, and this deal only works for customers in the US and Puerto Rico. It expires at 11.59PM ET, so act fast. View Deal

Disney says that so far, viewers are enjoying the originals (they single out The Mandalorian, which is no doubt the reason a lot of people are subscribing), as well as The Simpsons and older Disney content. Over the Black Friday weekend, Disney Plus released a trailer of what to expect on the service in December. The Last Jedi and Thor Ragnarok are still to come, for example.

Check out our review of Disney Plus for more, but this is the service you need if you want all the Disney content in your life that you can handle. Expect this to be the streaming home of all future Disney movies.