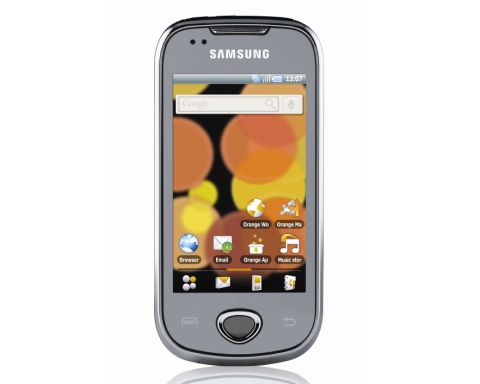 There's a heck of a lot of power, style and performance in the Samsung Galaxy Apollo, a phone that's supposedly aimed at the cheaper end of the market.

It has great battery life, a very good screen and is powerful enough to cope with apps and browsing easily. But how does it stack up against the vast number of competing Android phones in its price range?

The touchscreen is extremely sensitive and smooth to the touch. Navigating menus and typing is a joy thanks to its superb responsiveness, plus the processor flings menus around without any chugging at all.

The idea of capacitive front buttons is initially quite a worry – but they actually work. The addition of a touch of vibration feedback each time you press one makes them feel like… buttons.

Many of the great features of Samsung's Galaxy S have made it across through the TouchWiz user interface. The camera's great, the music player a joy and the video player handles most popular types of media. It's also a great PMP.

Why on Earth would Orange and Samsung not have a meeting and decide on one OS skin for the phone, rather than squeezing in two? Newcomers to Android are going to be utterly bewildered by having two differing skins to work with at first.

The custom suite of Orange apps is disappointing, with some ugly widgets and bizarre shopping tools that don't work via Wi-Fi. The Samsung skin and widgets are much, much better and really should've been the only option.

That said, the phone struggles to display Samsung's feature social widgets – its Feeds widget and the Buddies visual Contacts app often bring the Home screen to a shuddering halt, so you're best sticking with a Home screen free of complex widgets.

The Galaxy Apollo is currently available on Orange contracts starting from £20 a month, and at that price its classy (Samsung) UI and superb capacitive touchscreen obliterate the competition.

The phone's 400 x 240 display offers a better resolution than that of the competing HTC Wildfire, while the capacitive touchscreen is a massive enhancement over the resistive screen of the Vodafone 845.

If you're after a new, cheap Android phone that runs Android 2.1 with ease, the Galaxy Apollo's the best there is at the affordable end of the market.