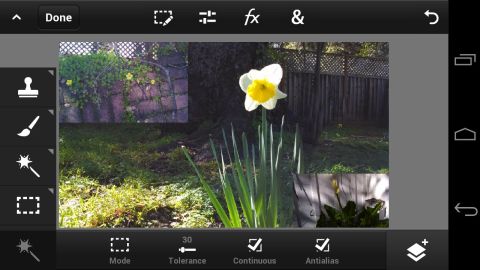 Adobe has a Photoshop Touch app for mobile now, bringing full circle the devices that one can filter, crop, layer and manipulate images.

This is version one of the Photoshop Touch app for phones, and it's by no means perfect. However, for those looking for something more than a simple overlay filter, PT has it all. Literally.

It's like playing a game in a lot of ways. How many more distortions, saturations and warps can one apply to an image before calling it complete? With 36 different effects to choose from - each with their own set of options like thresholds, intensities, tones, angles and brightness levels to adjust - just how much can an image change before posting it to Facebook and Twitter?

In adjustments, which offers everything from basic black and white to more advanced curves, most options come with a percentage scale that's easy to adjust to find the right level of temperature, saturation, noise reduction, etc.

It's relatively easy to revert an edited photo back to its original form - unless you save an image. The reverse arrow icon in the top left corner of the screen lets users retrace their tracks if they find themselves in a no man's land of shadows, highlights and inversions.

Basic editing tools, adjustments, effects and image manipulation (warp, crops, fade, lens flare, etc.) are located across the top, while another set of tools stretches along the bottom and floats along the side when a user drags their finger up from the bottom right icon.

While not lacking in tool options (all that contribute to a pretty legitimate editing experience), the app can be as frustrating as it is transformative. It's still buggy, shutting down unexpectedly or taking longer than it should to save an image.

Beyond the expected early-version technical glitches, Adobe has seemingly seen it unnecessary to include a thorough explanation of how to use the many tools that a beginner with only a cursory knowledge of Photoshop can easily get stuck on, or simply to maneuver around the app.

Most perplexing of all is a lack of thorough instructions. Whereas the tablet version of Photoshop Touch included tutorials and demos, Adobe cut down on these to seemingly save space on the phone. We can appreciate that, but we'd also appreciate having the minutes back we spent trying to figure out what to do after using the Scribble Selection tool (thankfully, there's always Google).

There's a help section that gives users a basic understanding of how to start a project, work with layers and selections, share and save, and a basic rundown of tools. However, the tool tutorial doesn't actually tell you which tools do what, but rather how to select a tool, zoom in and out, and hit undo and redo.

For someone completely Photoshop ignorant, there's a steep learning curve to understand what's up with the Clone Stamp function, for example.

That said, the app doesn't lack for functions. Everyone from the occasional user to Photoshop addict should be pleased to see a wide assortment of tools literally at there finger tips.

Experienced users will no doubt have a better time adjusting to the app than the first time Photoshopper, though after awhile selections become easier to return to and find.

We experienced some fat finger mishaps to start, leading us to initially believe this app was an ill fated attempt to shrink the tablet version onto a smartphone.

However, the more we used it, the more natural it all started to feel. Our first scribbled tries at Scribble Selection, which involves tracing the inner outline of an object in an image with a green line to keep it and edging around it with a red line to remove unwanted parts, reminded us of learning to color in the lines in kindergarten (which we failed miserably at, by the way).

Yet with time came more finesse, and we could apply lines and extract image parts with relative ease (to select what you want to keep and chuck the rest, select the Extract button visible under the icon that's a dotted square with a pen).

After this step, you can supplant the image onto another background.

Like a cool-toned photo, the app is pleasant on the eyes – some aspects of its layout are actually rather lovely and you feel like you are using a high-power editing tool.

However, there were a number of bizarre sizing issues that were glaringly obvious on the small screen of a smartphone. There were times when an image we were trying to warp or crop to layer would take up about 30 percent of the space on the screen, leaving a slate gray border on most of the display. Trying to edit an image that small is next to impossible.

Finally, as sharing and mobile go hand-in-hand these days, there is of course the built-in ability to send your pictures to the greater world.

Like driving a sports car with manual shifting for the first time, the more you time you spend with the Photoshop app, the more enjoyable it becomes.

There's a lot of learning as you go, which shouldn't pose a problem for those familiar with the desktop and tablet versions. However, first time or starting out users might want to retreat to the comfort of Instagram and other easier to pick up photo editing apps before they get the full feel of PT.

We did enjoy those "How did I get to this feature?" moments as it opened up doors to some interesting and unexpected editing aspects, but it also speaks to a lack of intuitiveness in the app. Again, those who've used the tablet version before should have an easier time getting from Point A to Point B on purpose. But, mobile users might find themselves somewhere they don't want to be (or can't get out of) more often than not.

Is it worth $4.99? There are plenty of features that will get some good drive time, but it really just depends on how often you'll use it.

It's not something we can see ourselves using every time we take a photo, but for those with creative inclinations and professionals who need a way to edit their work while on the go (projects are accessible through the Creative Cloud), you should get a lot of mileage out of this app.

For the average consumer, it could easily serve as an introduction to the wider world of photo editing. Or, it could simply be a way to kill time on the train while creating a crafty photo for a family member or friend. Either way, you might be pleased with what you can come up with.