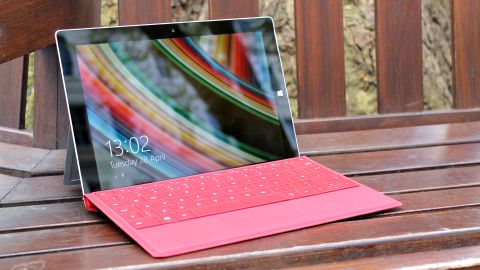 If you want the cheapest and most portable Surface tablet money can buy for lightweight computing tasks, the Surface 3 fits the bill. Power-hungry users should consider the low-end Surface Pro 3 instead.

[Editors Note: At the time of this update, the Microsoft Surface 3 tablet is no longer available from first-party sellers. Instead, we advise turning your head to the newest Microsoft Surface Pro, a full-fledged Windows 10 tablet with the power and function of a laptop.]

It’s hard to believe that it’s been over two and a half years since Microsoft came out with its entry level Surface 3. Frankly, it’s a device that was born in the shadows of its pro-grade companion, but was a marked feat for its value nonetheless, one that you’ll almost certainly see on sale on the secondhand market come Black Friday.

The Microsoft Surface 3 is a tablet that, as its maker’s slogan goes, doubles as a laptop in a way that its competitors have failed to replicate nearly three years on. Although it’s argued to this day that Microsoft botched the original Surface launch by hindering it with Windows RT, this version of the Surface tablet can be updated all the way up to the Windows 10 Fall Creators Update.

That said, the Microsoft Surface 3 isn’t without its faults. Perhaps most notably, the keyboard and stylus aren’t included, making the total cost a lot higher than its price tag would lead you to believe.

In spite of all that, Microsoft has constructed a more compact and less powerful, albeit cheaper version of the Surface Pro 3 in the form of the Surface 3. It makes several compromises, including a smaller, 10.8-inch touchscreen as opposed to the Pro’s 12-inch frame. But, the rest of the Surface Pro 3’s spirit is left intact, from the magnetically-reinforced Type Cover keyboard to the multitude of quality accessories you can buy for it.

Despite the lack of a Pro moniker, and the fact that it bears more than a passing resemblance to the Surface 2 (it's almost exactly the same size and weight), the Surface 3 has killed off Windows RT and instead comes with Windows 8.1 installed. It can run any Windows program out there (within reason) and is ready for a free upgrade to Windows 10 as well as all of its subsequent updates.

One of the main differences between the Surface 3 and the Surface Pro 3 isn't visible from the outside. On the inside, Microsoft has opted for an Intel Cherry Trail Atom CPU, which is passively cooled and allows the device to run silently in the absence of a fan while generating barely any heat.

It was the first Cherry Trail processor to feature in a tablet, but despite being faster than Intel's previous Bay Trail Atom chip, it's a step back from the more powerful Core-series i3, i5 and i7 processors used in the Surface Pro 3. That goes without mentioning Intel’s newer Core m3 CPUs that have all but replaced Atom chips at this point.

Ultimately, the Surface 3 continues to position itself as a tablet that can replace your laptop, but power-hungry PC users should note that it's all about price, battery life, portability and quiet operation this time around. Don’t expect to edit 4K movies, play games at peak graphics settings or produce elaborate vector designs on it. There are other laptops for those tasks.

One of the devices going head-to-head with the Surface 3 is the Asus T100 Chi, which features a slightly smaller 10.1-inch display and comes with an Intel Atom Bay Trail CPU.

Unlike the Surface 3, the T100 Chi throws the keyboard part and a battery-powered (but not quite as good) stylus into the cost. It starts at a more palatable £399 (around US$604, or AUS$774) for the base model, which comes with 32GB of storage and 2GB of DDR3 RAM. That's quite a saving for a device that goes toe-to-toe with the Surface 3 in most departments.

Gabe Carey has also contributed to this review