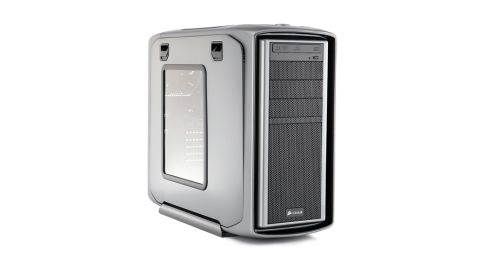 The huge roar the Titanosaurus Rex makes when it boots up was probably not a deliberate play on the name of this latest DinoPC, but it will make you think some beast has inhabited your new machine and will probably scare off any mammal in earshot. Yes, we've got another big, pricey rig here with Nvidia's ultra-desirable GTX Titan taking care of the pixel-pushing duties.

Last month we saw the excellent Scan 3XS Z77 Vengeance Titan become the benchmark PC for every other Titan-based machine that was to follow it. The Computer Planet machine it was up against simply couldn't compete with the smart choice of components, the aggressive pricing or the top warranty Scan offers.

So, how can this DinoPC compete against something like that? Well, the simple fact is, it can't. The Titanosaurus Rex does tick all the necessary component boxes, and has a fantastically ridiculous name, too: it's got a hefty overclock on its i7 3770K, a decent mobo, quick memory, a mid-sized SSD, lots of data storage space, water-cooling and a very sexy chassis.

The component choice isn't flawless though: DinoPC has opted to go for RAM rated at 2,400MHz, but has halved the amount that either the other Titan machines from last month offered or, indeed, the Wired2Fire Titanosaurus Rex.

It's also opted to add in some relatively pointless extras, including a Blu-ray drive and a pricey motherboard, too.

All those definitely add in to the luxury, high-end rig aesthetic, but are practically irrelevant for a machine whose main reason for being is to throw polygons around at high-resolutions and high speeds.

Where the Scan machine did so well was to choose a price-point and stick to it. The Titanosaurus Rex is another £300 (about AU$460, US$455) more expensive than the 3XS rig, and none of that cash has gone in to making this machine perform better where it counts. And since Scan took the choice to make a slight overclock to the Titan card, this DinoPC actually performs worse in-game.

There are a few concerns over the setup of the DinoPC Titanosaurus Rex. Remember that roar we mentioned? When you buy a rig of this price - especially one that promises a premium experience - you don't want it to sound like a Harrier jumpjet.

DinoPC has plumbed in the Corsair CPU cooler but minus the controlling software, so the twin fans sit at 100 per cent all the time. It's simply not an experience that suits the high price tag.