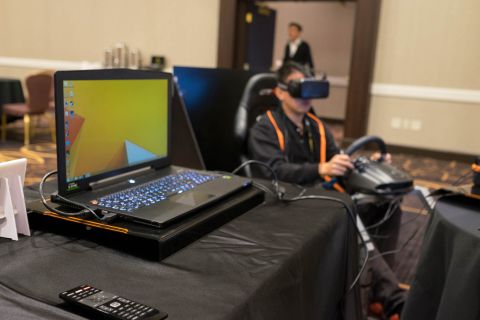 The Aorus X7 DT is a powerful gaming laptop and light enough to be a virtual reality rig you can wear on your back.

The Aorus X7 Pro-Sync was already a little monster of a gaming laptop and now Gigabyte has even managed to squeeze in a desktop Nvidia GTX 980 GPU. With the beefier graphics card this slim 17.3-inch notebook is as capable of pushing virtual reality as a full on desktop.

Almost no thicker (1-inch) than its dual Nvidia GTX 970M predecessor and a pound heavier (7.6 pounds), the Aorus X7 DT is wrapped in a very similar black anodized aluminum shell with plenty of cutout vent holes. Around the laptop you'll also find the eagle motif can still be found throughout the notebook including the beak on the lid and bird-like logos on the trackpad, power button, and the screen lid.

More surprisingly it's still an air cooled system despite having a desktop GPU. Additionally, users can outfit their system DDR4 memory, SSDs and either an Intel Core i7-6700HQ or 6820HK processor.

Specs aside, the performance of the Aorux X7 DT is phenomenal. I ran through two silky smooth Oculus Rift demos of Project Cars and Star Wars Battle front using the desktop GPU powered Aorus X7. The first had me sprinting down the Nürburg ring and the Green Mile rendered before me without a hitch even when I was nearly pushing 180mph.

In another demo, the Aorus X7 DT was strapped into a backpack that I could wear while hooked up to another Oculus Rift and motion sensing gun-shaped controller. Although Battlefront was never designed with virtual reality in mind I had no problem wandering in the virtual battlefield with the laptop powering the whole experience.

While it's amazing to have this much power packed into such a thin laptop it comes at a cost. For one thing there's hardly any room for batteries and while we haven't tested it, we can draw some assumptions from the SLI-version which only ran for an average of two hours. There's also the loud fan noise to consider as well.

The Aorus X7 DT is an impressive monster, packing the power of desktop graphics in chassis just an inch thick. Other machines like the Origin EON17-SLX are significantly thicker by comparison and the Asus ROG GX700 even needs a specialized liquid cooling block. Still there could be some unforeseen limitations of having such a thin form factor such as limited overclocking capabilities.

Gigabyte has yet to announce pricing for the Aorus X7 DT, but it will launch later this spring and I can't wait to get it in for our full review.