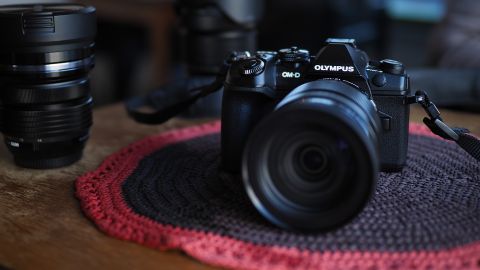 To further help users capture that decisive moment Olympus has also introduced a Pro Capture mode. The new feature essentially programs the camera to buffer a stream of moment you half press the shutter. When you’ve taken your shot, the camera will save all the frames you took along 14 previous frames before you fully triggered the shutter.

It’s an effective tool and it helped us capture the exact moment a geyser went off in this picture above. The only complaint we have is this mode is a little too silent for its own good.

Since Pro Capture locks the camera into using the electronic shutter, we would often take a shot not knowing if the camera actually triggered until we took a look back through our images.

To keep up with the Mark II dramatically enhanced shooting capabilities, the new EVF operates at a maximum refresh rate of 120fps and a response rate of just 5ms.

Though we’re used to looking through the viewfinder with one eye and keeping the other open on the world, you don’t have to worry about missing the moment with this EVF refreshing as fast as real-life.

If you’re a fan of birding or any type of wildlife photography, this camera and Olympus’ new M. Zuiko 300mm f/4 lens are worthy of your attention, delivering a much more compact package than that of a full-frame DSLR with a huge 600mm lens.

When you stack the improved AF system with the 63% faster EVF and new ProCapture mode, it’s clear Olympus is aiming the OM-D E-M1 Mark II to be a sport camera on par with the Canon 7D Mark II and Nikon D500.

Olympus’ new 20.4MP sensor already proved itself in the Pen-F and now it’s even better in the E-M1 Mark II. The resolution gains are apparent, while the colors pop with a natural look and there plenty of dynamic range in play even in our JPEGs. We even dare to say the image quality of the Mark II’s files look as good as Fujifilm’s new 24.3MP sensor in the X-T2 and X-Pro2.

As of this writing Camera RAW support for the OM-D E-M1 Mark II files aren’t available yet, but we’ll update this review as soon as it’s released.

Typically, with an Olympus camera, we’ve been able to shoot usable photos up to ISO2,000 without any noticeable grain. But with the Mark II we’re able to confidently shoot up to ISO3,200 and even push the camera to ISO4,000 before color noise begins to rear its ugly head.

That said, as of this writing without RAW image support we’re only able to see JPEGs, which have already been treated with noise reduction through in camera processing.

The on-sensor stabilization also makes it easier to operate the camera in video mode without a tripod. By the end of our review testing, more than a few of videos we shot with or without a camera support system were virtually indistinguishable.

The OM-D E-M1 Mark II not only marks Olympus’ first entry into the world of 4K video capture, the camera can actually record even higher-resolution footage than every mirrorless camera before it.

However, there are some limitations with this footage as the frame is slightly wider, the frame rate is locked to 24p and you’ll need a UHS-II speed card to record this high-resolution footage.