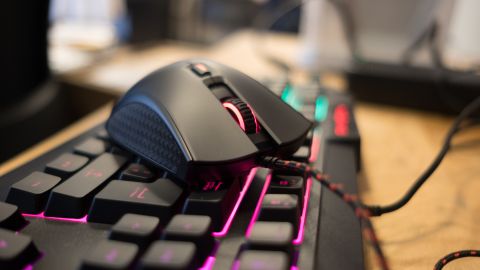 HyperX’s first gaming mouse falls behind its toughest rivals with a price to match and far fewer features much less performance.

HyperX might be better known for making RAM and gaming headsets, but recently the company has gone full-long into peripherals. Now, HyperX has introduced its first gaming mouse, the PulseFire FPS.

Everything about the HyperX Pulsefire FPS’s design centers around comfort. There isn’t anything too flashy about it, save for a few tasteful points of red lighting to highlight the scroll-wheel and DPI button.

The lack of embellishment leaves you to focus on the ergonomic shape of the mouse that has been crafted for right handed users. Along the sides, you’ll find a pair of rubber strips that feel soft and offer grip, while featuring a subtle grated pattern.

When placing our hand onto the HyperX Pulsefire FPS, we fell naturally into a palm grip that felt incredibly similar to the Razer Deathadder Elite – which, as of this writing, is our second favorite gaming mouse. Those accustomed to a claw grip can use this mouse just as well, but they’ll have to unnaturally arc their wrist over the peripheral’s substantial bump.

One other design feature we have to commend HyperX for is implementing a braided cable with distinct red highlights that make it easier to distinguish from the tangle of USB cables plugged into our PC.

If you’re looking for a comfortable, lightweight gaming mouse, then you’ll probably like the HyperX’s first offering. Weighing in at 95g, it definitely falls into the petite category of mice, even if it’s larger and heavier than the 83g Logitech G Pro gaming mouse.

Personally, though, this editor feels the Pulsefire FPS is a little too light for its own good, and it ends up feeling a little hollow on the inside. Unfortunately, the peripheral can’t be loaded up with optional weights, like the Logitech G502 or Corsair M65 RGB.

Buttons-wise, the HyperX Pulsefire FPS comes with five on tap, and they all offer a snappy response when pressed. We would have liked one more additional sniper button to reduce our mouse sensitivity on the fly, especially considering this gaming mouse has ‘FPS’ in its name.

Speaking of sensitivity, tracking feels responsive, thanks to a Pixart 3310 sensor that offers a maximum DPI rating of 3,200.

Now that might seem markedly lower than the Logitech G502 and Logitech G Pro mouse, which are sensitive up to 12,000 DPI (or 8,200 on the Corsair M65 RBG). But, let’s be honest here, when was the last time you really cranked things all the way up?

Our larger critique of the HyperX Pulsefire’s tracking abilities is the fact that the included software can’t calibrate the sensor to surfaces. If you’re using a particularly reflective table and get spotty responsiveness, there’s no way to fix that but with a physical mouse mat.

Meanwhile, competitors offer a higher-end sensor – with an exponentially higher DPI setting, if you desire that – and this exact software feature.

Unless you’re looking to complete the trinity of HyperX’s peripherals or looking for a slightly more affordable Razer DeathAdder Elite, there’s no real reason to get this gaming mouse. Many of its rivals come at a lower price with more programmable buttons, features and better software support.

If the HyperX Pulsefire FPS were a bit more affordable, it would make a lot of sense as a super budget gaming mouse. Unfortunately, at its current price point, there are just too many better options out there.