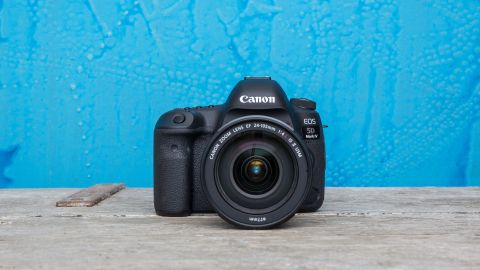 While the Canon EOS 5D Mark IV may look underwhelmingly familiar to the model in supersedes at first sight, don't be fooled – the engineers at Canon haven't stood still.

Compared to the EOS 5D Mark III, pretty much every element has been tweaked and improved upon. The full-frame 30.4MP sensor might not quite grab the headlines like those of some rivals, but it's still a welcome boost in resolution compared to the 22.3MP of the EOS 5D Mark III, while the improved noise and dynamic range performance make it an even more tempting proposition for those users thinking of upgrading.

And if you do upgrade, you'll get a camera that you can feel instantly at home with, while enjoying a number of improvements – the AF system is better for starters, with the Dual Pixel AF in Live View a huge leap forward. The touchscreen functionality improves handling considerably, while performance is also that much better.

It's certainly no surprise to see DCI 4K video capture, although the 1.64x crop of the sensor does make it hard to get those wide-angle shots; and while there is support for clean HDMI out at 1080p, it's not supported for 4K.

Those video irritations aside, the only other major stumbling block is the fairly hefty price, especially in the UK. However, if you can justify the outlay, then the Canon EOS 5D Mark IV has to be one of the most well-rounded and complete DSLRs we've seen. Suited to a range of subjects, from landscapes to sports and wildlife, it'll perform superbly in any situation.

The arrival of Nikon's 45.4MP D850 has stolen some of the EOS 5D Mark IV's thunder. With a higher resolution and a more advanced AF system, as well as other benefits, the D850 is similarly priced and for the neutral, the better choice out of the two.

The Alpha A7R III builds on the brilliant A7R II, but with an even more impressive performance. The full-frame 42.2MP sensor has been improved, but it can now shoot at 10fps. Lens choice is growing, but decent adapters are available for your Canon glass.