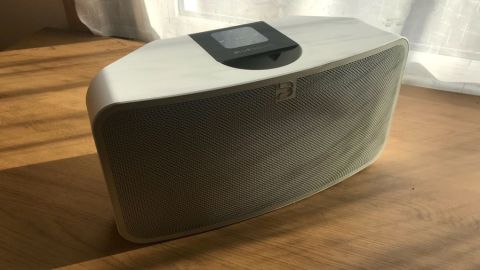 Able to stream from anything anywhere, this powerful standalone or multi-room speaker is best thought of as a hi-res upgrade on a Sonos speaker.

The Bluesound Pulse is an all in one wireless music system designed to stream music – even in hi-res – from almost anywhere you can think of.

Able to form part of a multi-room music system if you pair it with other Bluesound products, the Pulse Mini can host web radio streams, music from the likes of Spotify, Amazon Music and Deezer (and many more), and via Wi-Fi or Bluetooth from a phone. It can also stream from laptops and desktops, and network storage devices like the Bluesound Vault and NAS drives. It connects to a home network by either Wi-Fi or an included Ethernet LAN cable.

Let's start with the App.

BluOS is all about unity. Available for devices running iOS (including Apple Watch), Android and Kindle Fire (and Windows & Mac OS X desktops), the app puts all of Bluesound's sources on one screen. Streams are processed by an ARM Cortex A9 1GHz multi-core processor.

So far, so Sonos. Where the Pulse Mini really comes into its own is audio quality, and specifically, hi-res audio streaming.

Yes, it does offer Bluetooth 4.0 (including aptX) streaming, but it goes way beyond that by including compatibility with 48kHz/24-bit file types like FLAC, WAV and the new kid on the block, MQA. A digital amp and DAC then pushes up to 60W through two 2-inch full-range drivers, each in a patented dual-acoustic chamber. The Pulse Mini also includes a 3.5-inch woofer.

All this comes at a very high price – the diminutive Pulse Mini costs $499 (£499 / AU$999) – in either matte black or white. There’s a plethora of other speakers in the same multi-room family, from larger Pulse 2, Pulse Soundbar and portable PulseFlex to the Pulse Sub and Vault 2 hard drive.

Set-up is theoretically simple; attach your phone to the device’s own Wi-Fi network, then return to the BluOS app to enter your network password. Then get streaming.

However, in our tests the app told us that the Bluesound had to be attached to the exact same Wi-Fi network as the phone (our router has  2.4GHz and 5Ghz options, which is hardly unusual). That's fine, but the app then quit the setup procedure, which we were unable to resume without turning the Pulse Mini on and off again – it just wasn't clear where the settings are within the app. However, after downloading an app update, the system reset itself and attached to our home network without any fuss.

In short, the app takes a little getting to know. Given the breadth of sources the Pulse Mini can fetch streams from, the app's front-page is also a little overwhelming. As well as shortcuts to playlists, presets and favourites there's a panel to choose the source (such as your phone, Bluetooth, or optical), and then a long list of streaming services.

Eleven are listed on the front page – not including Spotify, oddly – though there's a link to a more comprehensive list. Streaming services include Amazon Music (a new addition), Spotify, Deezer, Napster, Qobuz, Slacker, TuneIn and Tidal (there are 15 in total). Happily, it plays nicely with the premium Tidal HiFi and Deezer HiFi subscriptions.

In terms of playing songs, the app is similar to Sonos, with an identical approach to both creating playlists, and placing songs in a queue. Though it's possible to tweak bass and treble levels on a tone control panel, like a lot of things on BlueOS, you have to go hunting for it.

However, judged purely on sound quality, the Pulse Mini hugely impressed us. We streamed Hunter by Björk in 16-bit FLAC (lossless CD-quality) from Tidal HiFi, and loved the fine detailing the Pulse Mini revealed within a deliciously warm soundstage.

However, the Pulse Mini also impressed with mere MP3s streamed from an iPhone, delivering a nicely balanced and surprisingly nuanced version of the same song at just 192 kbps. Not surprisingly, the same song sent over Bluetooth suffered from a lack of volume (we had to put it on full blast), and sounded muddy.

The Pulse Mini is also a really good platform on which to experiment in lossless music, though this is a niche within a niche; only Deezer, Qobuz and Tidal Masters will offer you lossless formats (the Pulse Mini supports MQA, FLAC, ALAC, WAV and AIFF). The system works most smoothly if you buy the Bluesound Vault2 for ripping CDs to (and for downloading lossless music from HDTracks and HiResAudio), though it’s an expensive add-on.

If you have another Bluesound products installed in your home, swapping from one product to another is simple. Pressing the home icon on the app and selecting which speaker you want is one way, but doing so recalls the previous track you were playing in that zone. To take a track with you means pressing a small arrow icon. You then have to choose which zone you want to take it into. However, you can also send the same stream through all speakers simultaneously, which is a very nice option if you're hosting a get-together. Also, if you buy two Pulse Minis, they can be daisy-chained together to create a wide stereo soundstage.

Easy to live with and with excellent sound quality across multiple formats and streaming services, the Pulse Mini impresses as a standalone network speaker, or as a component in a multi-room system.

The highlight of the Pulse Mini is its sound quality, but don't get sidetracked by its niche ability with hi-res and lossless music. Yes, it does a great job with FLACs, but its behaviour with regular compressed streams is almost as impressive. It's got more than enough bass, and squeezes out plenty of mid-range details that often get lost.

The ins and outs are unusually comprehensive, numbering mini USB, a headphone jack, a jack that doubles as either optical audio in or analogue audio in (there's an adapter in the box), a wired Ethernet LAN port, and a USB slot that can play tracks directly from a USB thumb drive.

We also liked its design and build; exceptionally solid and well constructed, the Pulse Mini (335x172x155mm, 3.6kg) has a V-shaped profile from the top, which makes it suitable for placing in recesses and corners. There are some touch buttons on the top for volume and navigating songs, etc., but the pad itself is ranged above a recessed chamber, so acts as an invisible carry handle.

The Pulse Mini takes a little time to set-up. It may be great with streaming from online libraries, but it’s not particularly good with existing music collections stored on NAS drives, laptops and desktops.

In our test, it proved time-consuming to set-up a network share with an iMac. The reason is that the Linux-built Bluesound OS is bespoke, so there's no third party middleware. Great, but the lack of DLNA and UPnP support means an infuriatingly manual process. Using a separate Bluesound Vault (a wired hard drive for ripping CDs to) as a hub is much easier, but an expensive addition.

If you’re after one of the best-sounding wireless network speakers around, look no further. Add options for both lossless music streaming and multi-room, and the fabulously constructed Pulse Mini becomes a genuinely intriguing proposition. An app that takes a little getting to know and a manual approach to network sharing removes a little of the shine, but the Pulse Mini remains, if nothing else, a solid sonic upgrade over a Sonos.