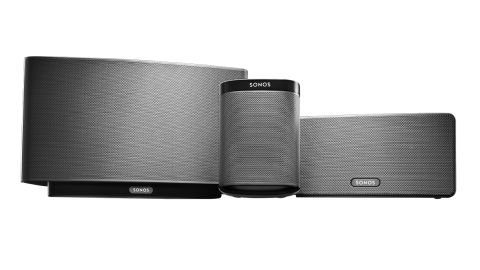 Welcome to the gang, now show us what you've got

Sonos Play:1 manages to be a superb quality speaker at a more affordable entry point than the rest of the Sonos range. You won't need deep pockets then for this one – and with an improved app and support for even more services, it's better than ever.

Update: Sonos has been busy. The once-limited Sonos range has been expanding with this year's Sonos Beam soundbar, Alexa compatibility on the Sonos One (with Google Assistant to come next year), and a revamped Sonos Amp around the corner.

The fun-sized Play:1 is still, however, a great speaker for anyone not fussed about voice control or getting the most advanced hi-fi Sonos has to offer – it's also getting some steep discounts across a number of retailers, making it better value than ever.

The Sonos Play:1 has big ambitions for its size.

Slipping in as the smallest, most affordable of the Sonos family, the diminutive speaker might fool you into thinking it's making big compromises in order to get below the premium bracket. The reality is quite different.

We were really impressed with the Play:3 but price has always been an issue with Sonos products. The Play:1 at £169 ($200), however, goes some way to convince us that you don't need the big bucks to get in on the Sonos love.

There's no Bluetooth to be found on the Play:1 and no battery either; this is totally about high quality streaming around the house that's only limited by your Wi-Fi capabilities. Well, that and the location of your power sockets.

The Sonos Play:1 arrives in black and white variations. Everyone will have their favorite but we found the white suited a bookshelf nicely while the black looked good plonked on the corner of a desk.

The grated design spills around the entire tin the speaker, which goes for the taller and slimmer look over the Play:3's wider angles. It's not the most exciting design you'll come across but it blends in nicely with its surroundings.

On the top of the speaker, the mute button has now transformed into a play/pause button instead, which is an intuitive move by Sonos. Double tap it and you'll skip to the next track too - extra useful.

There's also the volume rocker and status light. You may only use these for set up and never again, but it's handy to have them there nonetheless.

The design of the Play:1 is robust and premium though it's also really quite heavy, which makes us more hesitant to take advantage of the optional wall mount. These might be wireless, but we wouldn't really call them "portable" speakers.

Setting it up is nice and straightforward and those familiar with the Sonos way of things aren't in for any surprises. When Sonos first launched the Play:1, the speakers were dependent on a separate wireless bridge in order to communicate with your Wi-Fi. That's no longer the case, as a recent update allows the speakers to latch onto your Wi-Fi without any support, although Sonos advises that homes with poor Wi-Fi coverage may want to keep using the bridge.

And for homes with particularly frustrating Wi-Fi coverage, Sonos has launched a separate accessory called the Boost, which is basically a souped-up version of the Bridge. As Sonos describes it, the Boost (£79, $49) offers "enterprise-grade wireless capabilities" to stretch that signal right through the house.

Once you've done got the speakers plugged in, it's a case of using the app to make sure everything's communicating. If you're worried that one speaker won't be loud enough on its own, fear not - the Play:1 kicks surprisingly hard. No, it's not quite hitting the levels of the Play:3 or Playbar, but that's hardly a startling revelation.

On the inside is a midrange woofer and a tweeter, and while you'll only be getting the mono experience with one can, it's enough to easily fill a room with crisp sound.

The question is: do you want to fill a room or fill a house? If it's the latter, and you're already using Sonos audio at home, then these are excellent sonic limbs to cast into a bedroom, kitchen or even a bathroom.

But if you're using this as your main living room music source, you're going to want to add a second one in for stereo sound, which obviously doubles the price. The Play:1 kicks up a decent amount of bass though it won't be quite enough for, so we'd recommend pairing with a Sonos Sub if you're serious about getting the most out of the Play:1.

It could easily become a "just one more and then I'm through" kind of addiction. But if you do decide to take another hit, adding more speakers to your system is certainly easy, as we found. Once set up, you can pair your speakers together easily via the app to create that stereo sound.

You can also connect any other Sonos speaker to your Sonos bridge, so the whole family will play nicely together. Once you're all connected up, you can sync music across the house or have different music playing on different speakers. Controlling the Play:1 is extremely easy too.

With the Sonos app you have access to the local content on your controlling but you're also able to stream services such as Spotify, Rdio, Napster and SoundCloud. You can also do it via desktop software on your PC or Mac.

When the Play:1 launched, the accompanying app was one of our main criticisms. It was clunky and limited in functionality, but Sonos has made some big improvements since.

The refreshed controller app for iOS and Android now indexes your streaming services and local music files to let you find the track you want with one simple search.

The additions of SoundCloud and Google Play Music have perhaps been the biggest wins, while the support for multiple Spotify accounts is another welcome addition. There are still limitations - it doesn't officially support iTunes Radio or AirPlay streaming - but the list of supported services is much more comprehensive than it was in 2013.

If you're using a Windows Phone, the bad news is that you're still left out for now with no official Sonos Windows Phone app available just yet. Let's hope that changes soon.

Sonos has delivered again with the Play:1. We're hugely impressed with what it offers for its size, but perhaps more importantly, we're impressed with what it offers for the price. Sonos has cooked up a superb quality speaker at a more affordable entry point, meaning it's no longer just one for the upper earners – let's hope we see more of this attitude.