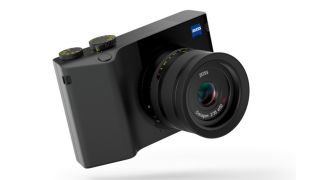 We first heard about the Zeiss ZX1 more than a year ago when it was announced at Photokina 2018, but since then we've not heard much in terms of a release date or detailed specifications.

Now a set of leaks specs appear to have given us a bit more to go on, as well as seeming to confirm the few details that have already emerged.

PhotoRumors has published what it claims are the full specs of the camera, including the optical design of the lens, ISO speeds, shutter speeds, size and weight.

A couple of things we did know were that the camera was set to have a 37.4MP full-frame sensor and a 35mm f/2 Zeiss lens, both designed in-house. The sensor will be paired with a leaf shutter (which means you’ll be able to sync your flash at whatever shutter speed you desire).

The newly leaked specs claim the lens construction will consist of eight elements in five groups, and that ISO speeds will top out at ISO51200, with a minimum setting of ISO80. The maximum shutter speed is claimed to be 1/8000 sec, and the shutter itself is said to be mechanical rather than electronic.

The leak supports previous rumors that the ZX1 would have a 0.74x Full HD OLED electronic viewfinder, joined by a large 4.34-inch touchscreen. Perhaps the most intriguing of the reported features is integrated Adobe Lightroom for in-camera editing.

Another unusual feature is the apparent lack of a memory card slot, with users instead having need to rely on the 512GB of internal memory.

It had previously been suggested that the ZX1 would be available to buy in early 2019, and while we're none the wiser in terms of an official release date, PhotoRumors says the camera will be announced "soon".

Back in August, a Zeiss representative replied to a Twitter user, telling them that the company was still in the concept or testing phase, which suggested that an official announcement was still some way off.