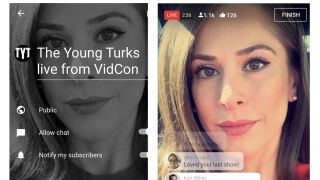 YouTube has dramatically lowered the number of subscribers users need to have before they can broadcast live.

In January, YouTube rolled out the feature to any users with more than 10,000 followers, meaning all the big players could share content with their followers immediately. Now Engadget reports that the requirement has been lowered to 1,000, and we’ve good reason to think the feature will soon be available to all, without any minimum requirement.

The move makes sense, as Twitter and Facebook have had livestreaming for a while now, with Facebook even adding the ability to broadcast 360-degree live video recently.

Livestreaming will look pretty familiar to you if you’ve used any of the competitors out there at the moment.

You'll be able to choose a title, whether comments are enabled, and if you want to send a notification to your subscribers, then away you go. The video can be either landscape or portrait, and once you’ve finished streaming YouTube archives the video to your account.

Don’t worry if you’re still far off 1,000 subscribers; when it announced the 10,000-subscriber threshold, someone at Google teased: “The rest of you will have it soon.” Because of this, we’re assuming the lowering to 1,000 subscribers is simply the next stage of Google testing the platform before a global rollout.

It'll be interesting to see if livestreaming does anything to diversify the base of content creators, or if it will simply add to the palette of tools for established users to play with.