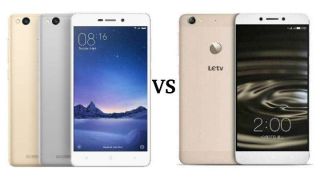 The Xiaomi Redmi 3S Prime was made available at 12PM earlier today, before going out of stock shortly, as is the case with every new Xiaomi product. The handset is an upgraded version of the standard Redmi 3S as it features double the storage, 3GB of RAM and a fingerprint scanner.

On the other hand, we have the LeEco Le 1s, which is slightly expensive compared to the Redmi 3S Prime. But to justify the additional amount you're paying, LeEco is offering a bundle of streaming services for free with the device. The device also comes with a bigger and better display.

So which one holds the edge? Let's have a look.

While the two devices are priced (almost) similarly, there are some key differences in hardware that's worth pointing out. The highlight of the LeEco Le 1s Eco is that it comes with a 5.5-inch Full HD (1920x1080) display, while the Redmi 3S Prime sports a 5-inch HD (1280x720) display. So not only does the Xiaomi offering sport a smaller display, but it also comes with a lower resolution.

But the Redmi 3S Prime doesn't fall behind in all areas. Despite being a smaller device, it sports a massive 4,100mAh battery, whereas the Le 1s Eco has a moderate 3,000mAh unit.

Both smartphones come with 13MP rear cameras and 5MP front cameras, so there's not much to differentiate among the two on that front. There are bound to be some key advantages and disadvantages as camera performance is also determined by the software optimizations done by the manufacturers. On paper, however, we can call this a tie.

The Le 1s Eco comes with an octa-core Mediatek MT6795 (Helio X10) processor, clocked at 1.85 GHz (although the official LeEco page claims it to be 2.2 GHz). The Redmi 3S Prime uses Qualcomm's Snapdragon 430 octa-core chipset bearing a clock speed of 1.4 GHz. Since both chipsets are based on the Cortex-A53 CPU architecture, the one with the higher clock speed should (at least in theory) perform better, giving the Le 1s Eco the upper hand here.

Also read   :   Everything you need to know about the Redmi 3S and Redmi 3S Prime

This is one of the few areas where the Redmi 3S edges out the LeEco Le 1s Eco, with a mammoth 4,100mAh battery compared to a 3,000mAh unit.

Both devices come with fingerprint scanners on the back, but the LeEco Le 1s Eco also comes with a USB Type-C port. The two devices have 32GB of storage and 3GB of RAM, which puts them on level terms. But one big caveat here is that the Le 1s Eco lacks expandable storage, while the Redmi 3S lets you add microSD cards of up to 256GB. This could shift things in favor of the Xiaomi device if you're not content with 32GB of onboard storage.

As mentioned above, LeEco also offers a comprehensive content platform along with the device thanks to 12-months of LeEco Membership (worth Rs 4,900). You can stream popular movies and other video content for free with more services slated to be added soon.

The LeEco Le 1s Eco is available via Flipkart for Rs 9,999. There are no flash sales or registrations required, so you can simply get the device whenever you want.

Unlike previous Xiaomi handsets, which were available via designated flash sales, the Redmi 3S Prime will thankfully be available via open sale from day one, i.e - August 9. This means one can just head over to mi.com or Flipkart and buy the phone without any need for prior registration.