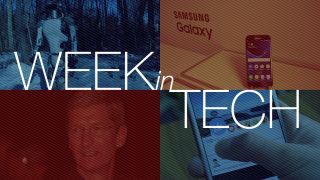 It's not every week that you discover new Galaxies, attack people with owls and get frightened by increasingly human-esque robots, but that's the world of tech for you. This week saw some big reveals at MWC 2016 in Barcelona, the continuing battle between Apple and the FBI, some new ways to pretend you care about people on Facebook and a whole new episode in the Far Cry saga. It's a mammoth Week in Tech!

We've been reading the rumours for ages, but at last the new Samsung Galaxy S7 range is official. But is the S7 a great leap forwards, or more of a hop, skip and jump? There's only one man to ask, and that's our very own Gareth Beavis. The new Galaxy S7 is, he says "a strong showing" with "a number of potentially important upgrades, but it's a shame the design looks so similar to the S6". The Galaxy S7 Edge is much more to his liking, however. It's "a really great update for the Edge range" with a "beautiful screen" and a "massive" battery.

Samsung wasn't the only phone maker with new a flagship at this year's MWC. LG was there too with the LG G5, and as Matt Swider explains, "Not only does it include perks for power users, the South Korean company changed the way we access the battery, inventing a cartridge-like input so you don't have to remove the back cover. This 'magic slot' is located in the bottom frame of the phone, and doubles as an accessory port. Add-ons so far include a battery grip with physical camera controls and a hi-fi audio module." The phone itself is pretty good, but the expandability is what's really interesting here.

Why MWC was the place to be

This year's MWC was a good one, and of course we were there to put every new gadget through its paces. We ran the rule over every new phone at MWC 2016, and sought out the completely unmissable computing highlights of the show – and naturally we've put everything you could possibly want to know in one place so you can max-out on MWC morsels. As the late, great Freddie Mercury once sang: "Barcelonaaaaaaaaa!"

You're SE and you know it

More details are emerging of the next iPhone, the budget and small-finger-friendly iPhone 5SE. The latest leak suggests that the 5SE will look almost identical to the iPhone 5S, bar a few minor changes: the power button is on the right, not the top, and the glass is slightly curved on the front. Specs-wise it should be close to the iPhone 6S, but it should cost the same as the existing iPhone 5.

The privacy battle between the FBI, which wants Apple to unlock an iPhone, and Apple, which doesn't want to unlock said iPhone, is rumbling on amid reports that Apple is working on iPhones so secure that even Apple itself wouldn't be able to hack them. In what's increasingly becoming a battle of PR rather than lawyers, Tim Cook sat down for a long interview with ABC News in which he said unlocking iPhones would be "bad for America" and the software equivalent of cancer. "Some things are hard, and some things are right," Cook said. "And some things are both. This is one of those things."

The Google-owned Boston Dynamics robot firm has a new bot to show us, and its name is Atlas. We saw a preview of Atlas last year, and he's since grown much more sophisticated. As Nick Broughall reports: "At 5ft 9in (175cm) and weighing 180lbs (82kg), this Atlas is getting mighty close to resembling the humans that made it. It's able to comfortably walk across uneven ground in the snow without falling over, which will undoubtedly help in its quest to destroy what's left of mankind in a nuclear winter."

Facebook still doesn't have a Dislike button, but it does have 'Reactions' – emoticons for 'love', 'haha', 'wow', 'sad', 'angry' and 'pay more tax'. We made that last one up. Why no Dislike? Hugh Langley explains: "Facebook believed it would have negative connotations. The 'sad' and 'angry' emojis are the compromise it has landed on."

Owl be there for you

"After my unwaveringly obedient owl ripped a spear-throwing tribal warrior from his ledge – and my newly-trained cave tiger went for the throat of a beehive-throwing grenadier – I scored a crucial headshot with a longbow I made after saving a wayward, one-armed member of my own tribe," writes Nick Pino. No, he hasn't gone mad in Sainsbury's again – he's reviewing Far Cry Primal, the game that takes Far Cry back to 10,000 BCE. The tl;dr version? It's good and you should play it.