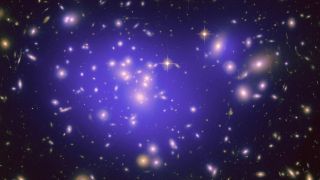 Deep underground, at the bottom of a mine in the Black Hills of South Dakota, scientists have been working for three years on one of the most sensitive experiments ever conducted.

They've been trying to find out why four fifths of the matter in the Universe seems to be missing. We can see its influence, in the rotation of galaxies and the way light curves as it travels through the cosmos.

But the actual substance, which physicists call "dark matter", is proving elusive, and they're trying to figure out why.

To try to confirm the existence of these particles, researchers filled a tub with 370kg of liquid xenon cooled below -110C.

They took the tub down to the bottom of a mine, a mile below the surface of the Earth, to shield it from cosmic rays, and surrounded it with sensors that should be able to spot if a WIMP collided with a xenon atom in the tank.

The experiment was called LUX - short for "Large Underground Xenon", and it ran for twenty months.

But they found nothing. At a conference in Sheffield, the LUX team admitted that the $10 million experiment - which had the highest sensitivity of any to date - had not found any proof of the existence of dark matter particles, despite exceeding its technical goals.

"We're sort of proud that it worked so well and also disappointed that we didn't see anything," said University of California, Berkeley physicist Daniel McKinsey, one of the scientific spokespersons for the project.

But the quest continues. The site of the experiment is now being renovated for a new, $50 million version of the same process - which will be 70 times more sensitive and start in 2020.

If that again fails to find anything, we may need to start thinking about other possibilities. One is that the dark matter is accounted for by zillions of tiny black holes.

But that proposal has plenty of problems of its own, and WIMPs are still the leading theoretical candidate.

"LUX has done much more in terms of its sensitivity and reliability than we ever expected it to do," said Rick Gaitskell, another of the project's spokespersons. "We always want more time with our detectors, but it's time to take the lessons learned from LUX and apply them to the future search for dark matter."