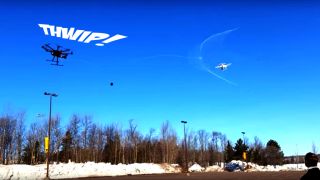 A team of engineers at Michigan Tech have developed a solution for capturing drones that looks inspired from comic books.

Their design equips a drone with a net launcher capable of loosing a snare distances of up to 40 feet. The net is attached to a line fixed to the drone, ensuring the prey remains tethered to the hunter drone upon capture.

Mo Rastgaar, associate professor at Michigan Tech and PhD in Mechanical Engineering, is one of the staff on the project. According to Rastgaar, he realized how poorly prepared authorities were to handle malicious drones while watching a World Cup soccer game. Snipers were providing security at the stadium, which Rastgaar believed to be sub-optimal.

"If the threat is a drone, you really don't want to shoot it down," says Rastgaar in Michigan Tech News. "It might contain explosives and blow up. What you want to do is catch it and get it out of there."

Once the entangled drone is secure in the net, the anti-drone can safely remove it from the premises. This better ensures public safety, should the drone in question be carrying hazardous materials or in an area where shooting it down would be dangerous.

Tokyo's police force implemented a similar response a few weeks ago to counter errant drones after authorities found a drone containing radioactive materials landed on the roof of the Japanese prime minister's office. The system used a drone trawling a net to intercept its target in place of a net launcher.

France has also developed a unique drone countermeasure of its own, utilizing drones that can triangulate the suspicious drone's pilot, take a mugshot, and alert the authorities to make an arrest before any harm could be done.

Drone registration became mandatory in the United States this past fall following concerns ranging from airline pilots narrowly avoiding them mid-flight to some kid outfitting his aircraft with a fully-functioning flamethrower.

It remains to be seen how effective Michigan Tech's machine will be in culling rogue drones, but seeing the web-slinger take down an aircraft with such ease is enough to get us humming the Spider-Man TV theme, so we'll take that as a win.