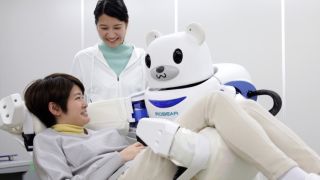 Bad news for taxi drivers: Ford, Uber and Google are working on self-driving vehicles that could render the traditional cabbie redundant within a few years. But transport isn't the only area in which tech promises to make us mere meatbags surplus to requirements. From doctors to drummers, the list of jobs robots can do is getting longer by the day.

We're not suggesting that everybody should panic. But… EVERYBODY PANIC!

Robots on the road

You know about driverless cars, but you might not have considered the effect they'll have on driving jobs. Self-driving trucks have been testing in Nevada since 2015, and mining giant Rio Tinto is using driverless trucks to move iron ore in its Australian mines. The firm says the robots are more efficient and save tons of money too, enabling Rio Tinto to operate mines with much smaller vehicle fleets than before.

Robot trains are already common, and robot trams are next: in Germany, tram operators VGF and üstra have been investigating two kinds of automated tram guidance systems: VGF is using stereo cameras, while üstra is working with Bosch on a combination of cameras and radar. It's estimated that by reducing collisions, such systems would pay for themselves within two years.

Meanwhile in Helsinki, little driverless buses – think minibus rather than double-decker – are being tested in a pilot scheme. Mercedes has published images of a full-sized driverless bus that it's been testing in Amsterdam, and the UK government is very keen on introducing driverless public transport to Britain's roads.

Even bike couriers and takeaway drivers aren't safe: Amazon and Google are planning to use drones to deliver packages, while Just Eat is quite literally rolling out six-wheeled delivery robots to deliver takeaways in London.

Robots on the floor

We've seen factory robots before, most often making bits of cars, but the robot revolution is only just beginning in factories. Earlier this year Apple and Samsung supplier Foxconn reportedly replaced 60,000 factory workers with robots as part of its strategy to have robots make up 30% of its workforce by 2020, while in the Dongguan factory city the world's first all-robot factory is under construction. Between September 2014 and 2015, 505 Dongguan factories invested £430m in robots, aiming to replace more than 30,000 workers.

The more repetitive the job, the more it's likely to be automated, and automation is coming to other repetitive jobs, such as supermarket checkouts – one human can supervise six or more tills, which saves supermarkets so much money that it more than compensates for the increase in shoplifting and fraud.

Robots in the office

IBM's Watson AI is already an accomplished medical expert, and earlier this year it became the world's first AI lawyer too. Accountants are getting nervous about their new robot overlords, and even supposedly creative jobs such as journalism have already been replaced in some organisations by software: the Associated Press has robot journalists that automatically turn financial stories into news reports. Google, meanwhile, has an AI attempting to write science fiction novels, and in Japan an AI program wrote a story so good it passed the first round of screening for a national literacy prize.

In London, researchers at University College have created an algorithm that can scan, analyse and reproduce individuals' handwriting, enabling computers to 'write' in convincing longhand – which is ironic, given that humans are going the other way, increasingly eschewing the written word in favour of emoticons and GIFs.

Robots are coming for receptionists and call centres too. If you haven't yet encountered the phrase 'cyborg telemarketing', prepare to be appalled: callers who don't have brilliant English (or whatever language the recipients speak) play pre-recorded clips of people who can.

Not only can robots automate the outgoing calls, but they can automate the incoming ones too. Chatbots, as they're called, can handle all kinds of customer service queries without human intervention, and they're coming to an app near you: Facebook reckons they're going to be huge, and that's one of the reasons it's so keen for you to move to its Messenger app. That's where its bots will be. And of course, you've already met Siri, Google Now, Alexa or Cortana.

The robot band Compressorhead's almighty racket is good for a laugh, but robots are already replacing musicians in the studio, fulfilling the 'keep music live' fears of 1970s session musicians. In addition to old hands such as synths, sampling and AutoTune, software is constantly finding new ways to replace real musicians. Apple's Drummer (in Garageband and Logic Pro) does an astonishing job of replicating real drummers, while the ever-improving Vocaloid software is getting uncannily close to human singing.

Electronic music tools are getting smarter all the time, and we've already seen dead musicians return to the stage in hologram form. If you've heard of Hatsune Miki (above) you'll know that the combination of holograms and vocaloids are good enough to become Japan's biggest pop star. The next generation's Justin Beiber may only exist as bits.

Robots in the home

We're told again and again that the most 'human' jobs – jobs involving empathy, creativity and sympathy – will be the ones that don't get automated, but Japan begs to differ. The combination of a plummeting birthdate, people living longer, changing family structures and low immigration is causing a crisis in elderly care best summarised by the word Kodokushi, which means 'lonely death'. According to marketplace.org, in Tokyo alone 4,000 senior citizens die alone every year. The solution? Robear.

Robear, as the name suggests, is a robot bear – chosen because bears are powerful but also cute – and is the product of a research project that hopes to develop care robots that can look after the elderly. Widespread use is some way off – a Robear currently costs about $250,000, and it's a very early prototype – but in Japan at least, the increasing use of robots in elderly care looks inevitable.

Surely some jobs are safe – soldiers, for example? Nope: Russia's Iron Man is a genuine Terminator that's designed to replace humans in battle. Butchers? They could be automated as well. Road worker? There's no reason why the robots can't do that too. In fact, it turns out that when the robots come, the safest place to be will be the pub. According to the BBC, 'publican or manager of licensed premises' is the job least likely to be automated, with a likelihood rating of just 0.4.

That's good enough for us. To the pub!