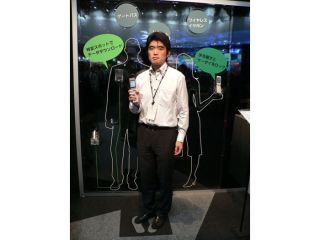 Any flow of data, be it music or information, could be initiated through a touch

We reported back in February that Japanese telco NTT was ready to market a new kind of data transfer system that uses the human body as a network and, true to its word, the company has come up with the goods already.

The newly decided commercial name of the former ‘Human Body Communication System’ is the rather odd Firmo, but we’ll overlook that in favour of focussing on what is a rather startling piece of technology.

Initial Firmo customers will pay ¥800,000 (£3,900) for a set of five transmitters and one receiver when it goes on sale at the end of June. The receiver is intended to be attached to a standard electronic door lock for verification purposes, but the magic is in the card-sized transmitter that needs to be kept in a jacket or trousers pocket.

The 7mm-thick device acts like an ordinary office security card in that it holds the data needed for such access control, however said data flows through the body and into the receiver when the holder just touches the door handle.

At present, Firmo can channel data only one way – from transmitter to receiver – and at just 230Kbit/s, but NTT plans to make the bits flow both ways at broadband speed within two years.

The applications for such a system are virtually limitless – any flow of data, be it music or information, could be initiated through a touch and sustained in the same way.

It’s likely initial applications will involve mobile phones receiving advertising when anyone holding one touches, for example, a shop display, but we’re looking forward to movie downloads through our fingertips to players in our pockets before long.