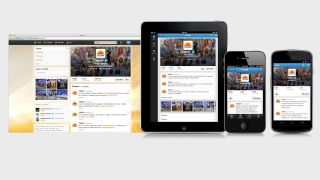 Yes, it's the season of goodwill to all men and women, unless those men and women happen to work in a rival tech firm - and in the run-up to Christmas, it seems everyone's battling everybody else.

First up there's everybody's favourite waxy-faced spine chiller, Eric Schmidt of Google, a man we just know has horrible things in his freezer. Commenting on the frosty relationship between Apple and Google, Schmidt said "I have a gun."

Don't worry Apple! He's just making a point! "The press would like to write the sort of teenage model of competition, which is 'I have a gun, you have a gun, who shoots first?'," Schmidt says. Google, though, "is more like a country", and it and Apple "[are] not sending bombs at each other." Is it just us, or should that sentence end with the word "yet"?

Wait, what's that sound? Is it the sound of reindeer on the roof, or is it the sound of record companies stamping their feet and going all huffy? Why, it appears to be the latter: Apple's long-rumoured streaming music service, dubbed iRadio by some, isn't going to launch in early 2013 after all because Sony, Warner and Universal don't like Apple's terms and are refusing to sign up. This is not a repeat from 1999.

Not all tech battles are so obvious: some firms prefer to upset their rivals with the cunning tactic of making nice things and selling stacks of them. That's clearly what Huawei's up to, with the announcement of a 6.1-inch "phablet" called the Ascend Mate.

It's a direct rival to the Samsung Galaxy Note II, and Huawei's senior VP Yu Chengdong posted the announcement from his very own Galaxy: he has the device, he says, for research so that he can make the Ascend Mate even better than Samsung's product.

There's a new console player in town too: Nintendo's Wii U, which is a breath of fresh air in a market where both the Xbox 360 and PS3 are approaching the end of their working lives.

As ever with Nintendo the Wii U isn't competing in hardware terms - as Andrew Hayward explains, "the Wii U may initially offer graphics power comparable to the Xbox 360 and PlayStation 3, both of which have been on the market for several years" - but "that's not the point": the Wii U's unique selling point is its GamePad, a cross between a traditional controller and a tablet.

Is it any good? Xbox and PlayStation gamers "may struggle to see much of the appeal for now", as many games are mere ports, but Nintendo is "providing something different instead of simply replicating others' plans." As it evolves and developers take advantage of the innovative controller, "the Wii U is sure to provide experiences like no other along the way."

What we want for Christmas is...

We always like to finish on a happy note, and this week Techradar's experts have been sharing their Christmas wish lists - and unlike much of this week's tech news it's all about excitement and enthusiasm, not doom and gloom. We even have nice things to say about Windows 8.

We also have nice things to say about Tech., the new weekly iPad magazine from the makers of TechRadar.

That's us, of course, and because we're full of festive cheer we're offering a great deal on new subscriptions: not only is Tech. available at a bargainous price, but you can currently get five issues of it free. Ho ho ho!