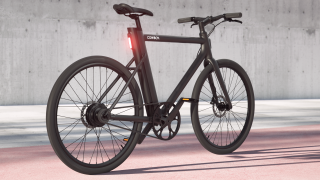 Picture an electric bike and you probably imagine a chunky step-through frame, a colossal battery strapped to the downtube, pannier racks and tires that wouldn't look out of place on a tractor. It's just not cool.

The super-minimalist Cowboy (from a Belgian company of the same name) aims to change all that. It boasts road-style geometry, internal cabling, the most subtle of branding, a neat little removable power pack hidden on the seat tube and even a SIM built into the frame.

It looks great– but what's it like to ride? To find out, we took it for a spin in London's bike-friendly Regent's Park.

The first thing we had to get used to was the lack of controls; unlike most e-bikes the Cowboy has no power button, no throttle, and no gears. All we had to worry about were the brakes, which were the opposite way round to what we're used to due to the test bike having been built for cycle lanes of continental Europe.

Once we were confident we weren't going to launch ourselves over the handlebars, we pushed off as normal and couldn't help yelping in surprise as the power immediately kicked in, propelling us far further than we'd expect. It's something Cowboy's Bob Eck (watching our maiden voyage) calls the 'ooh effect'.

Just a few minutes later, riding felt natural and effortless. The bike responded to the force you exerted on the pedals, working harder when we did. On the park's flat cycle lanes, it felt like we were constantly riding downhill, and overtaking serious cyclists with their Lycra and carbon was almost embarrassingly easy.

The 2019 Cowboy is available in just one frame size, suitable for people from about 5'7" to 6' tall. At a conveniently Cowboy-sized 5'10" we found it very comfortable, and we suspect people a little shorter or taller than the stated heights could ride easily enough with a few adjustments. Different sizes and a women's frame with a lower top tube are on the cards for future releases.

The Cowboy isn't just a pretty frame, though – it's also smart. Hidden inside the head tube are a SIM, a backup battery (charged by the pain power pack) and everything else you'd expect to find in a phone, minus the speaker and microphone.

This comms unit sends diagnostics to Cowboy when the bike is powered on, letting the company know if there are any issues, and communicates with your phone at the start and end of your journey. The bike can also give you warnings before you set off – if you haven't plugged the battery in properly, for example, or there's something amiss with the tires.

The removable battery means you don't have to haul the Cowboy into your hallway to charge it up; just park it as normal, unclip the power pack and take it to a convenient outlet. I was worried a quick boost on a multiway adaptor in the office might not be sufficient, but it was nearly fully juiced up after a couple of hours.

It's not possible to buy spare batteries and have an extra one fully charged (as Eck explains, it's the most expensive part of the bike), but with a range of 70km, that's unlikely to be a problem. And unlike an electric car, if you do run out of juice, you won't be stranded – you'll just have to ride without assistance from the motor.

So where can you buy one? Well, only in Belgium (where the company was founded), France, Germany and the Netherlands so far, but the company has global ambitions. Cowboys are built in Poland, and Eck expects the business to continue expanding in concentric rings from that base.

"We have to do some modifications to the bike in order to make it more competitive and acceptable to the consumer in the UK – most notably the brakes," said Eck. "It’s not as simple a change as you might think, because it has consequences for product development, manufacturing, assembly, but we hope to do that by the end of the season."

And outside Europe? "Well the US is a huge market," Eck said. "We think that we would be very interested in launching there. Our approach would be different, we think, based on the scale of the opportunity. Right now we’ve really penetrated into four countries. That is a road map that we’re learning from, and that will change what we do in the future."