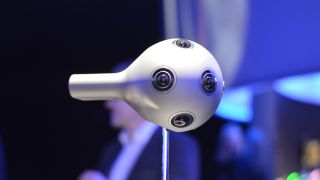 We found out about the Nokia OZO VR camera back in July but details were slim – until now.

Not surprisingly, the OZO isn't aimed at consumers, but at professional filmmakers interested in trying out VR. And while you'll be breaking the bank to get one, Nokia is promising to deliver a camera unlike any seen before.

The final specs of the device include the stereoscopic 3D video captured by eight synchronized global shutter sensors (which are 2K x 2K resolution per eye), and spatial audio through eight integrated microphones, along with live monitoring in real time through a VR headset.

The OZO can shoot at 30 frames per second while running on a rechargeable Lithium Ion battery, and can record about 45 minutes of footage to a 500GB solid state drive.

Nokia will be shipping the OZO in the US in Q1 of 2016, and will make the camera available to global markets in due course.

You're probably wondering how this affects you, assuming that you're not actually going to buy one. Well, Nokia's hope is that the Hollywood bigwigs will take an interest in the OZO, and will use it to create VR content for the nascent consumer headset market.

After all, what's the point of owning an Oculus Rift, HTC Vive or PlayStation VR without solid content? Sure, there are plenty of games in the making and more being added, but movies, streaming and virtual reality experiences are part of this new wave of immersive technology that you're going to want more of.