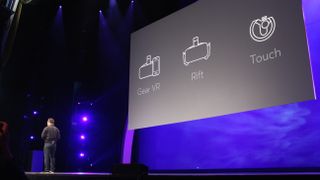 There was an Oculus Rift, a price and a release date at today's Connect 2 keynote, but it wasn't exactly the Oculus Rift consumer edition everyone was waiting for.

Instead, today's press conference unveiled a new Samsung Gear VR that supports the Galaxy Note 5, Galaxy S6 and its other 2015 smartphones. It also gave us new details about the Oculus platform.

But there was no official Oculus Rift consumer edition price, release date or pre-order information. That's the news we were all waiting to hear in the audience.

Understandably, the team is probably still making sure every bit of the headset will ship as best as it can be - this has been clear from recent Oculus Connect sessions about the difficulty making hardware.

It's always disappointing when a product confirms a specific date, then has to push back. Oculus likely doesn't want to promise something it can't deliver on time.

That leaves us with the current, rather wide release window of the first quarter of 2016. In other words, the Oculus Rift consumer edition launch will happen in January, February or March.

Oculus has been even more vague about the price. The Rift DK2 price is $350 (about £300, AU$497), which gives us an idea of what the final version could cost given all of its current components.

Oculus CTO John Carmack still has to give his keynote, but he'll probably continue to discuss mobile VR, and leave the pricing and release date announcement to Palmer Luckey at a future event.