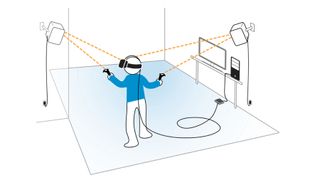 Pre-orders for the HTC Vive are set to kick-off at the end of February, but if you're thinking of grabbing yourself a slice of virtual reality action, then be warned – you'll need a fair bit of space to play in.

This news comes courtesy of the Vive PRE development kit user guide, which HTC has put online. The instructions detail the minimum amount of space you'll need to enjoy the Steam VR room-scale tech which allows you to walk around in virtual reality, and have that fully immersive VR experience.

The minimum area of clear space you'll need will be 1.5 x 2m (5 x 6.5 feet), which will obviously need to be free of any furniture or other clutter. You'll also need to place your PC so that the 5m of cable attached to the headset will reach from anywhere in that play area (for obvious reasons).

Mirrors are also bad news and will need to be covered, as will windows and other sources of direct sunlight, HTC notes (any vampires out there are going to love VR).

Little base station boxes, two of them (looking like small satellite surround speakers), will also need to be wall-mounted and can't be any further than 5m apart. These are wireless, fortunately, and just used to track your movement in conjunction with the headset.

Bit of a kerfuffle?

So it's a bit of a faff, but at least the space requirements aren't huge, unless you have a small living room. (Although remember – this is the minimum area allowed). Still, we've only got an average-sized living room and would easily be able to make that sort of space. And setting up the base stations is a one-time deal, too.

The biggest hassle for us would be the fact that our powerful gaming PC is upstairs in the study, not in the lounge, and dragging that down and plugging it all in would be a bit of an effort.

Do bear in mind, though, that the HTC Vive can also be used standing in one spot, or indeed sat down. But the room-scale VR is one of the big attractions in terms of complete immersion.

All this might remind some folks of when Microsoft first brought the Kinect out, and all early adopters had to work out if we had enough space in our living room to use the thing. You needed to stand about 8 foot away, at least, ideally (in our experience, back in the day), or risk rather flaky detection of your movements. Direct sunlight also messed badly with Kinect's tracking, as it apparently will with the Vive's.