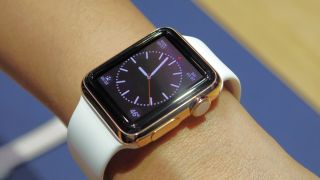 Not long ago, Fitbit had some problems with skin irritation, not something you want on a device you're wearing all day, every day.

Apple also wants you to wear its watch for most of the day, so it's put a lot of work into making sure the materials used don't affect your skin as much as some of its competitors.

According to a new section on the Apple Support site it has run a lot of tests including thousands of material composition tests, thousands of prototypes for trial studies, hundreds of toxicological assessments and consultations with board-certified dermatologists.

Apple clearly wants to ensure your skin doesn't get irritated by the new device but knows it can't avoid it for everyone, so it's warning those who buy the device that it does contain elements of nickle and methacrylates.

There is also a gentle reminder that irritation can be caused by wearing your device a little too tight and it recommends wearing it just a touch looser for a more comfortable fit.

Cleaning is also a big issue for some – but that's the same with all wearables and smartwatches.

If you're not used to wearing something on your wrist then having a wearable bit of tech can be a little strange at first. Apple just wants to make the experience as comfortable as possible.