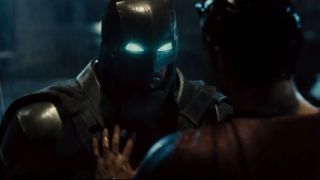 With a little over a month until Zack Snyder's Batman v Superman: Dawn of Justice hits cinemas, the final trailer for the film has given us our first real glimpse of just how brutal Ben Affleck's Batman will be.

The emphasis for this trailer is very much on the Batfleck, with Henry Cavill's Superman not getting a word in throughout the entire two minutes.

The trailer opens with Batman taking out a crew of two dozen bad guys single-handedly, before lamenting to Jeremy Irons' Alfred that he's not as fast as he used to be.

Brutally man-handling his enemies by throwing them around the room, the scene impressively manages to capture the sheer power of Batman, something that has always struggled to be captured on film.

The trailer continues by remixing footage we've seen from previous trailers with shots of Superman and Batman fighting it out – plus a nice little interaction between Gal Gadot's Diana Prince and Affleck's Bruce Wayne. The trailer ends with Superman's surprise at an armored Batman blocking his super-punch.

The trailer may be a little short on the whole "Dawn of Justice" part of the film's title, but it promises to deliver the "Batman v Superman" part in a big way when the film opens next month.