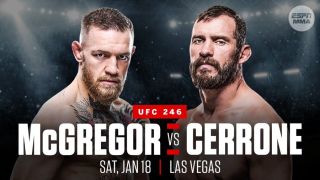 Are you ready? And, more importantly, is Donald Cerrone? Conor McGregor - the Notorious one - is approaching the Octagon at UFC 246 tonight and will be desperate to make a point. Over a year since his last appearance, we can see why you'd be desperate to find out how to get a UFC 246 live stream for McGregor vs Cerrone today. We'll show you the best way to get it done, regardless of where in the world you are.

UFC 246 is happening at the T-Mobile Arena in Las Vegas.

ESPN+ is your place to watch in the US and we have further details below.

And with a history like McGregor's - UFC's fastest knockout, first fighter to hold two simultaneous belts and a 21-4 record - he would need a pretty big name to make his triumphant return. Enter, Donald 'Cowboy' Cerrone

Cerrone is a fighter sitting comfortably with a 36-13 win ratio, making him the record holder for both the most UFC wins and most finishes. In other words, a UFC 246 live stream will see two record-holding fighters go head-to-head.

But it is not all about the title fight. Holly Holm is facing Raquel Pennington. After defeating Ronda Rousey to take the Bantamweight women's title, Holm seemed on top of the world. Now she's clawing her way back up after a number of big losses. Can she defeat Pennington and regain her fearsome reputation?

No matter which fight you're tuning in to see, we're here to help you find a UFC 246 live stream. Scroll down to find out details for watching it live from the US, UK, Canada and pretty much anywhere else in the world.

Live stream UFC 246 from outside your country

Worry not if you're a huge UFC fan but aren't in the country to watch UFC 246 when it happens. If you find the coverage is geo-blocked, you can try using a VPN to change your IP address to a country where the fights are airing and watch this main card just as if you were back at home.

Virtual Private Networks are also handy if you're concerned about streaming safely on the web, thanks to the encryption they use to hide your details. And the best won't log your personal information, either. We've tested hundreds of VPNs and can recommend ExpressVPN as the very best VPN in the world.

That's because ExpressVPN (which also comes with a 30 day money back guarantee) has proved itself as giving super fast connections, watertight security and is just really, really easy to download and use. You can watch on many devices at once including Smart TVs, Fire TV Stick, PC, Mac, iPhone, Android phone, iPads, tablets etc, too.

Plus, if you sign up to a year of ExpressVPN, you'll get 3 months extra FREE and a rather tasty 49% off the usual monthly rate.

In the States trying to watch UFC 246? ESPN+ has had the exclusive rights for the past year meaning it is the one place to watch it.

How much that costs depends on whether or not you already subscribe to the service. If you don't, then the best way to go is with a UFC Bundle, costing you $84.98. That won't just buy you the UFC 246 PPV, but you’ll get a year-long subscription to ESPN+ (that would normally cost $50 alone). A subscription to ESPN+ also opens up access to over 20 exclusive live UFC Fight Nights, alongside original content including Dana White’s Contender Series, UFC Destined, and Ariel & The Bad Guy, plus classic fights, replays, and there’s also the perk of fewer adverts.

For those that already have an ESPN+ subscription, you can still buy access to UFC 246 for $64.99. A price that recently increased, not that the biggest PPV fighter returning has anything to do with that!

You can tune in to watch all of the action including preliminary fights on Saturday, January 18 at 8pm ET / 5pm PT.

And don't worry if you want to grab the pay-per-view but are going to be outside the US when it's on. Just scroll down the page a little to discover how to use a VPN to watch a UFC 246 live stream from abroad.

UK fans trying to watch McGregor score another win? Luckily, it is easy to watch, simply head on over to BT Sport to catch all of the action.

The bad news is that this is a pay-per-view event only, meaning you will have to pay £19.95 to live stream UFC 246. You can catch the full coverage of all the preliminary cards shown from 1am in the early hours of Sunday on BT Sport.

Don't feel like staying up that late? BT also shows spoiler-free replays of the fight so you can catch all of the action the next day.

You'll need to head to BT Sport Box Office to buy the pay-per-view. The coverage is available on services and devices like Sky, Virgin TV, Google Chromecast and Apple Airplay.

Watch a UFC 246 stream in Australia

Anyone in Australia trying to watch UFC 246 will find Main Event will be the place to go. As a pay-per-view over in Australia, It will cost you $54.95 to catch the event.

The event will be airing Down Under on the Sunday, January 19 at 2pm and then will be replaying at 8pm and then every 6 hours from 6am.

Fans based in New Zealand can catch this major MMA brawl over on Sky Arena. Similar to most other streaming platforms, you will have to pay for the PPV, costing $39.95.

The main card will kick off at 4pm but if you want to catch all of the action, early prelims start at 12.30pm.

UFC 246 FAQ: all the info on McGregor's comeback

Why is there so much hype around UFC 246?

While the event boasts a strong undercard, including the lightweight clash between Anthony Pettis vs Carlos Diego Ferreira, the main interest surrounding UFC 246 is undoubtedly the return from retirement of the sport’s biggest star, Conor McGregor.

The Irish fighter will be getting back in the Octagon for the first time in 15 months to face Donald Cerrone.

Who is the favorite to win the McGregor vs Cerrone fight?

McGregor is currently hot favorite to make it a perfect comeback, with odds around 3/1 for his victory.

How much will Conor McGregor get paid for UFC 246?

McGregor is widely rumored to be earning a $5 million purse for his return to the Octagon. However the 31-year-old has stated that that figure is less than 10 percent of what he’ll actually make after predicting he’ll enjoy a staggering $80 million payday thanks to his Reebok sponsorship, pay-per-view points and other endorsement deals.

When was McGregor's last fight in the UFC?

His last appearance in the ring was in Las Vegas back in October 2018 when he suffered a fourth round defeat by submission to Russian fighter Khabib Nurmagomedov.

What has Conor McGregor being doing since the Khabib defeat?

Despite his absence from the ring, McGregor has continued to remain in the headlines for mainly all the wrong reasons.

He was arrested last March for robbery after slapping a phone out of a fan's hand in Las Vegas and walking away with it. While just five months later he was charged with assault after throwing a punch at a senior citizen in a Dublin pub.

On a more positive note, McGregor successfully launched Proper No. Twelve - his own brand of whiskey - around the world during his downtime