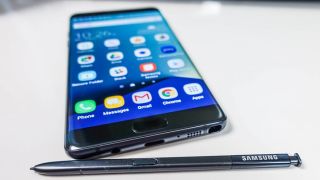 What are you going to do with millions of returned mobile phones? If you're Samsung, it the answer is: refurbish them, make them safe, and sell them on in emerging markets like India and Vietnam.

We've known for a while that that was the plan for the Galaxy Note 7, and now we've got our first look at the second, safer version of the device, courtesy of a series of leaked images. As rumored, the 3,500mAh battery has been swapped out for a 3,200mAH model.

There's nothing too dramatic about these shots, courtesy of a Vietnamese Samsung site - we already know what the Note 7 looks like, after all - but it's evidence that the refurb program is on track and almost ready to go.

Based on screenshots of the software running on the device, it also looks like the refurbed units are going to be running Android 7.0 Nougat. The original model was launched back in August 2016 with Android 6.0 Marshmallow on board.

What we don't know yet is exactly which countries this refurbed Note 7 will be sold in, what the price will be, or what name it's going to have (presumably Samsung will want to leave some distance between this and the original...).

Any electrical components not involved in the refurb process are going to be disposed of in an environmentally friendly way, Samsung has promised. The company has also been at pains to point out that its future phone batteries are going to be so rigorously tested, there's no chance of a fire breaking out ever again.