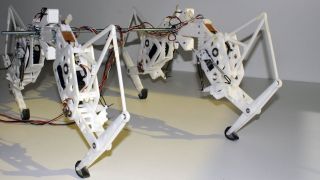 If you've seen any robot try to walk, you'll know that they're not very elegant. The reason is their cumbersome, inefficient gait, optimised to prevent them falling over, as opposed to being honed for speed.

By contrast, humans and animals are able to walk and run swiftly and smoothly, using the absolute minimum of energy. And roboticists want to know why. So PhD student Geert Folkertsma at the University of Twente has built a robotic cheetah that he hopes can help optimise the robots of the future.

"As you might expect of the fastest land animal in the world, the cheetah makes very efficient use of its energy," Folkertsma says.

“I wanted to create a robot that runs the same way, with the aim of applying this knowledge to the development of new robots."

His cheetah-bot is pretty small - thirty centimetres long - and weighs in at just 2.5kg. That makes it twenty times lighter than the real thing and four times as small. "Not every element is where you would find it in the animal, but the spine, shoulders and hips occupy the same position," said Folkertsma.

Studying video footage of real cheetahs and using software to analyse their movements, Folkertsma was able to figure out what makes the creature so efficient.

"The main difference between existing walking robots and my cheetah robot is the backbone,” he says.

"The trick was to imitate it without complicating matters unnecessarily: instead of vertebrae and intervertebral discs, we worked with a cleverly placed spring which delivers approximately the same effect.

"Cheetahs are also able to store a lot of energy in their muscles for later use. This too is something we have imitated by fitting carefully selected springs in our robot’s legs."

It doesn't move as fast as you might expect for a robotic cheetah - just one kilometre per hour. The real thing, if it were scaled down to the same size, would run at 20 km/h. But it is able to move using only about 15 percent more energy than the real thing.

And Folkertsma says he's working on the speed issue.

"A Master’s student is currently working on a newly developed robotic leg and the first tests, focusing on a single leg, are already promising," he says.

"With four legs of this type, the robot will be able to run much faster; I think this will help us make genuine advances."