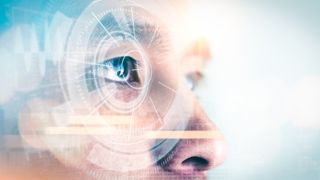 Tired of switching between your regular glasses and reading glasses? Or just willing to put anything vaguely sci-fi into your body? Researchers have developed a pair of contact lenses that can adjust between two different prescriptions in the blink of an eye.

Well, two blinks of an eye. As reported by Gizmodo, users simply have to blink twice in quick succession to zoom in and out, replacing the need for spectacles for various prescriptions, and bringing us ever closer to a cyborg future.

The lenses were described in a published paper titled A Biomimetic Soft Lens Controlled by Electrooculographic Signal, which calls the lenses "a novel human–machine interface [...] mimicking the working mechanisms of the eyes of human and most mammals."

The paper also speaks of the "potential to be used in visual prostheses, adjustable glasses, and remotely operated robotics in the future", with various applications across the worlds of health tech, wearables, and even augmented reality (AR).

The use of AR is on the rise, with smart glasses like Snap Inc's Spectacles, AR headsets like the Magic Leap One, and accessibility measures like the Epson Moverio (which display subtitles during theatre performances through a pair of glasses) all taking the technology mainstream.

While auto-zooming contact lenses sounds like something out of Blade Runner or RoboCop, the ability to focus at different distances is one of the most basic visual functions of the human eye. It's something we do constantly on a day to day basis as we swap our gaze between our smartphones, our laptops, our 4K TVs, and – you get the idea.

But for those of us with impaired vision, certain distances are harder than others. Having the kind of medical tech that can flexibly adjust our depth perception could be a game changer for optometry.

It's not on shelves yet, but we could easily foresee this technology making its way into opticians, and potentially even being offered through national health services, if it became manufactured on a large scale.

One potential issue is that humans tend to blink involuntarily – and accidentally refocusing your field of vision every time you blink in quick succession could be a bit disorienting. The lenses currently also require an array of electrodes around the user's eyes, and are being used in highly controlled test conditions.

Even so, the far-off future of bodily enhancements looks to be coming into focus.