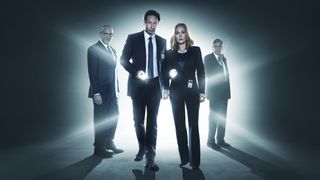 If there's one thing seasons eight and nine of the original series and the far-from-successful films have shown us, it's that we don't just want more Mulder and Scully, we want GOOD Mulder and Scully. We not only want the duo in perfect form, but also a quintessential The X-Files storyline at its best.

So, thankfully, we got a two-day/two-part premiere of season 10, because had there only been one, there'd be good reason to think the franchise shouldn't have come back afterall.

Penned and directed by series creator Chris Carter, the first episode, aptly titled "My Struggle," feels messier than it should as the long awaited reboot opener, bogged down by exposition-heavy monologues that might unhappily remind you of the series' final seasons.

Speaking of, it's been nearly 15 years since the 9-season-long series ended, and nearly 10 since we last saw the two agents on the hunt for truth. In that time, Mulder and Scully have grown older, wiser and tired. They've gone through a lot, as have many of us along with them.

Mulder has gone off the grid and gone for the more unkempt look, while Scully is still wearing her gold cross and playing the role of skeptic, despite everything she's been through.

Things don't feel exactly right between the two at first, nor should they, but as the episode progresses, their arguments seem to evolve and by show's end feel like an old couple bickering than two fresh agents out in the field.

But that's not the reason My Struggle… struggles. Skinner (Mitch Pileggi), who just happens to still be the director of the FBI (after all these years? Really?) asks Scully to help him introduce Mulder to Tad O'Malley (Joel McHale), a talk show host trying to uncover a big cover up. Mulder isn't interested at first, but ends up falling for O'Malley's theory very quickly and very strongly.

O'Malley's theory is fast and loose which, in a show about the unknown, doesn't feel wrong.

O'Malley believes that aliens do exist (or at least one crash landed in Roswell in 1947), but the true threat lies much closer to home. He thinks that a group of the powerful elite have taken alien tech and have been using it on humans, leading him to believe that the ultimate goal is for the takeover the US and eventually, we assume, the world.

The reported alien abductions were actually faked to help create mutations by mixing human DNA and alien DNA, while free energy has been kept from society to help maintain the political power structures in place due to the oil and coal industries, while major disasters like terrorist attacks on US soil (and this might be off-putting to some) were false flag operations to drive fear, leading to more governmental control and surveillance.

It sounds like a conspiracy theory documentary you may have come across on Netflix, but at least it's a plotline that we can hold onto, even if we might not want to. Either way, Mulder is convinced, especially when he's shown an aircraft boasting alien tech that disappears.

Beyond the monologues that sound like they've been taken from the dozens of reboots before its time, for better or worse, the episode follows a predictable formula: We have an excuse for Scully and Mulder to start working together again, we have our token whistleblower (though unfortunately, O'Malley seems more like an attention-grabbing creeper, especially when he hits on Scully), Skinner is back, we have our victim abductee and the mysterious Smoking Man is back, even though he went up in flames in the season 9 finale ... which I guess we'll just ignore.

Worse, however, is that the truth doesn't seem to be out "there" anymore. It's not aliens who are behind the curtain, but man. The theory might go over better with newcomers to the show, but might leave those who watched the series for years with the weekly reminder that the "Truth is out there" a little deflated.

To be frank, it isn't a terrible premiere episode by any stretch. But it isn't great, either. Luckily, we've got episode two, "Founder's Mutation," to put the show on the right track.

Unfortunately, it also asks you to accept an unrealistic premise - that the FBI asked two agents, who left the FBI a number of years ago, to return to their old posts working on the X-Files - but I'm happy to believe he's trying to use being in the FBI as a front for his own investigations of the "truth."

But then we're unexpectedly introduced to half-human, half-alien siblings, who have superhero-like powers, an evil doctor conducting horrible experiments on children and Mulder and Scully in suits and running down hallways with their guns outs.

I'm suddenly pulled back into nostalgia and I've stop questioning logic. And I'm ok with that. Give us a good story, decent execution, and we won't look too closely at the loose ends, rough edges and cliches.

The episode also brings more evidence of fertility experiments using alien DNA under the guise of mutation. It brings out fears in Mulder and Scully, as they worry about their son William, who was given up for adoption in the early series, but might have alien DNA in him as well. Their worries for William lead to some surprising but wonderful scenes, which I won't spoil here.

Throughout the episode, we're reminded rather constantly that the government is hiding something, with files and evidence made "classified" by the Department of Defense repeatedly - so let's not forget the overarching theory introduced in episode one.

Still, Mulder and Scully are back in the roles we know them best in, solving crimes and uncovering terrible experiments. But we're also treated some really great (creepy) visuals as well, one of the things I missed most from the series. The scenes with the gathering birds and a baby's hand reaching out of its mother's cut belly are particularly noteworthy.

We've slowly plodded our way through the reboot's initial setup and re-introduction. It had a fumbling start, but eventually finds its footing in the second episode, and leaves me eager to see just where the the next four episodes will go.

Hopefully, this new rabbit hole they're taking us down will be worth the trouble.