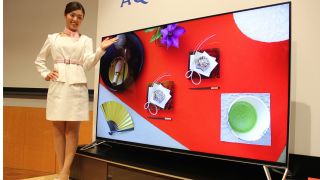 Sharp could be producing its own televisions across Europe and the Americas again, with a buyout by Foxconn giving this proud old TV giant another shot at competing in the tricky Western markets.

Sharp's decision to license its brand to HiSense in the Americas and Universal Media Corp Slovakia in Europe has helped cut the company's losses in recent years, but Foxconn's megabucks buyout looks set to bring some major changes.

A statement by Sharp suggested: "We have decided to review our current brand licensing business in Europe and Americas, and are currently examining various possibilities."

That could mean buying back the business in major territories that include both the UK and US.

Sharp panels remain both hugely prevalent and highly rated in the television world, but the brand itself has slipped away from relevance to the consumer, allowing the likes of Korean giants Samsung and LG to gain major footholds.

However, a $3.5 billion buyout by Taiwan's Foxconn could now see the brand resurgent.