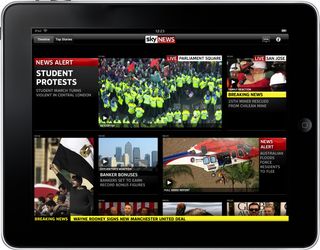 Apps versus Smart TV - who wins?

Sky believes that the trend towards connected TV services from some of the leading manufacturers is actually a play for a content platform, and that apps on tablets, laptops and phones provide a better user experience.

In an interview for TechRadar's Brit Week, Sky's director of product development, Brian Lenz, explained that the company's policy was to leave the viewing experience on the television screen as clean as possible.

And, to that end, the company believes that the best way to bring things like social network interactivity alongside major TV programmes is through companion devices.

"We have the view that the companion device is the far more powerful place to bring advanced functionality," Lenz told TechRadar.

"The facts are that we already have it, and it's called Sky TV."

"Throwing other apps in is fine, but the only thing making it worthwhile is getting to content.

"The real question of something like those apps is 'are they putting them up just to have lots of things to say and is it cluttering TV viewing?'

"Or are you much better of with something like an iPad where I can do whatever I want while watching TV and the TV still has its pristine big image?

"I can barely get my kids to tolerate me looking at the guide, so the interesting question is are there enough reasons where you can use these apps unobtrusively.

"Right now we are very excited at what we are doing with the companion device with things like the Sky+ app or Sky News Insider."

Sky, of course, has a well established interactive offering through the red button, but the company believes that its major learnings around this are that it's an important niche rather than a mainstream application.

"We've spent a lot of time in interactive, and we have learned a lot of things," added Lenz

"It's not that interactivity isn't valued to a degree, it's just not the primary use case – which is obviously watching television.

"There's a lot of talk about convergence, and I think we all thought that it would be on what screen, but what we are finding in the service provider world is that we can offer a convergence of service across whichever device is appropriate at that time, be it mobile, computer or television.

"I also think that our work on the companion device gives us the chance to experiment.

"Our smallest user base if for Sky+ HD and that's 3.5 million people so if we get something wrong there for 80 per cent of our user base then we have 3 million pissed off people!

"In the app space you can experiment and we can see if the things that work for us there can be put onto the television in an unobtrusive way that will really enhance the experience."