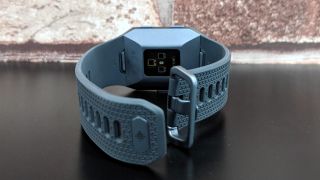 Above: The Fitbit Ionic, which uses another form of glucose-monitoring tech.

We've long been used to hearing stories about massive companies like Apple and Google acquiring or investing in startups to further their own technology, but in a surprising move, Fitbit has now invested in the blood sugar-monitoring startup Sano. It's Fitbit's first-ever startup investment in the roughly 11 years it's been around.

Fitbit is putting around $6 million into Sano, according to CNBC, which should help the company make its devices better fit for health monitoring than they already are. In the process, it will help give Fitbit an edge in the face of increasing competition from the likes of Apple.

Fitbit actually already has some glucose-monitoring technology in its Ionic smartwatch, but Sano's small "patch" might be more efficient.

Unfortunately, we know very little about the patch, which monitors glucose through tiny needles that dig into the skin. Because the needles don't go very deep, though, it's reportedly less painful for diabetics than most of the alternatives.

On the other hand, the patch hasn't even started shipping out to consumers, and there's a chance it will need approval from the US Food and Drug Administration before it can be sold inside Fitbit devices in the States.

Fit and a hit

The affordability of Fitbit devices and their ability to go comparatively long periods without charges continue to make them an appealing option for health professionals conducting studies. The Sano investment might make Fitbit's devices more appealing still.

Last November, for instance, the US government's National Institutes of Health (NIH) announced that it had bought 10,000 Fitbits to help with a study aimed at learning more about the role individual activity plays on health.

All the same, other, larger companies are making Fitbit fight for its once-enviable position. The Apple Watch is no longer the novelty device critics once dismissed it as, for one, and Apple itself is reportedly working on a glucose monitor that somehow doesn't break the skin.

Google parent company Alphabet, too, is working on a small monitor for continuously monitoring glucose through its subsidiary company Verily.

The new investment may provide the boost Fitbit needs, provided Sano's tech turns out to be the best way to monitor glucose on a consumer-grade wearable.

Hopefully, in the midst of this technological arms race, it'll be those who rely on such tech for their health who come out on top.