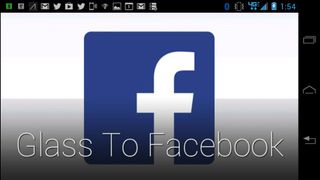 Today word spread that Facebook has come to Google Glass, albeit through a third-party app's door.

Trying to access the app via creator TeseractMobile's website results in a security alert, which is reportedly due to the site's root certificate, so proceed with caution if you decide to risk download.

In other Glass news, Yahoo CEO Marissa Mayer revealed during the Wired Business Conference in NYC that her company is tinkering around with dev versions as employees explore how wearers can access and operate Yahoo's services. No word on whether the company plans any GG apps, says CNET, but stay tuned.

Google Glass is the future and all, but you can read about what's going on right now in our news blips.