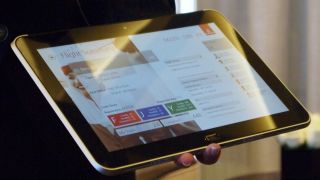 Airline Emirates has become one of the first big Microsoft customers to deploy a large number of Windows 8 tablets alongside its own bespoke Windows 8 app.

TechRadar was one of the first to see the new app in action, which enables the on-board flight purser to drill down through information about passengers and crew, as well as receive urgent messages. A purser is responsible for all the crew on board the aircraft.

At the heart of the move over to Windows 8 is the ElitePad 900, announced last month by HP - the tablet will launch commercially in January. Emirates is planning to roll out 1,000 devices in total next year.

The app is designed to give staff members the key information they need; on board a large airliner such as the Airbus A380 there can be as many as 26 members of the passenger-facing crew, so a purser may not always know exactly who will be on board or other details about them, such as what languages they can speak.

"I might have a crew member who is American, but who speaks Filipino," explained purser Yara, one of the staff members who demonstrated the app to us. "This is a great resource to have, to get to know the team immediately. We can also do staff reviews on board and this information is relayed very quickly."

It's intended that using the tablets will cut down on the amount of information flight staff have to have on paper and could also hold complete procedural manuals in the future.

While the front end of the app is all-new, the back end of the Emirates app existed already. It uses technology already developed by the airline called Knowledge Driven Inflight Service (KIS), which originally ran on older HP convertible Windows tablet PCs.

Pursers can use KIS to brief the cabin crew before every flight and check any passenger special needs as well as see who is enrolled in Emirates' frequent flyer programme Skywards. They can also perform in-flight upgrades to business class or first class, as well as post customer feedback that's emailed to headquarters upon landing.

Staff can also conduct straight seat swaps on the device at any time and show passengers their new seat using the tablet. Seating preferences are also relayed so that customers won't be offered inappropriate seats, for example.

The app follows the full Windows 8 style guidelines and cabin crew can swipe to scroll through the app as well as swipe up from the top or bottom to save forms and other selections.

Kevin Griffiths, senior vice president of cabin crew at Emirates, talked to TechRadar about the story behind the app. He says the company tried numerous other devices but was attracted to the ElitePad by its looks plus lack of weight and bulk plus support for legacy applications - Emirates' ElitePads will run Windows 8 Enterprise.

The ElitePad is 3G enabled and Emirates has airtime agreements in place in most of its 120 destinations, so the tablet will re-sync on landing. "You have to cope with [the potential of] having no coverage, so everything you need is synchronized to the tablet before the doors close," says Griffiths.

Griffiths also gave us some insight into the surprisingly short development timeframe. "The whole project from the development starting has been about six months. We have already trained 100 people and they will go online in December.

"In January after the launch of the ElitePad we'll be rolling out over about four months and all of our pursers will have a device each then."

Notably the airline chose an Intel-based Atom tablet rather than an ARM Windows RT-based device. "Because we have a lot of existing systems, we've got applications that run in the desktop, so they're Win32 services behind the Windows 8-style app," explains Griffiths. "The short answer is that they don't run on Windows RT."

The app is sideloaded through Emirates' own corporate IT deployment rather than being publicly available through the Windows Store.

Testing wasn't too straightforward since the ElitePad is an unreleased device. So Griffiths says Emirates used Windows to Go to test the app on other machines. Emirates is also testing whether the tablet will need charging in-flight, although the initial indications are that it won't.

"The reality is it won't be used for every minute during the flight, so on the vast majority of our network we won't need to charge," adds Griffiths.

"We had the first three flights yesterday from London, New York and Hong Kong with the tablets in use. We didn't have to charge the device from London and it was in high use [staff were keen to use the tablet for the first time] and the battery did that flight."

"It sounds like a small thing, but one of the great features is the crew photographs – we have 16,000 crew, so it can be really helpful."