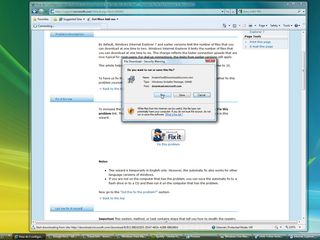 IE has had a long and varied life thus far

Microsoft's browser is 15 years old today. The browser's roots are far older though. Development at the National Center for Super Computing Applications (NCSA) produced 1987's Mosaic browser. The tech was transferred to a company called Spyglass which in turn licensed it to Microsoft.

The browser wasn't launched with Windows 95 (which launched 15 years ago next week) but was part of the Windows 95 Plus Pack. This included a component called the Internet Jumpstart Kit now replaced by the Internet Connection Wizard.

An interesting fact is that a lot of the team that created Mosaic went on to develop Netscape Navigator, the forerunner to Firefox.

Let's take a quick look at how the browser has evolved over the last decade and a half.

The original IE was just 1MB in size but was extremely limited in functionality. Version 1.5 was released several months later for Windows NT, the business version of Windows that went on to become Windows 2000 before being adopted as the codebase for Windows XP.

When the OEM version of Windows 95 was updated in 1996, it was shipped with IE3. As Microsoft made no money from IE, it was still only paying Spyglass a nominal fee. Internet Mail and News was also included.

Another revamp of the Windows 95 OEM version resulted in IE4 and overlapped into the Windows 98 era. The rubbish Active Desktop was included (so you could embed a webpage on the desktop). DHTML was also supported and Outlook Express 4.0 was included with the download.

CSS Level 1 and 2 support joined some text enhancements on the feature list for IE5, which was superseded by version 5.5 when the truly woeful Windows Me hit the shelves in July 2000.

The Windows XP browser IE6 remains a staple on many desktops, much to the annoyance of many a web designer. It was a long-lasting version, thanks to the longevity of XP and the antitrust battles that Microsoft had to face.

Microsoft had to respond to increased competition, originally from Mozilla. Indeed, IE7 saw the light of day in October 2006, when Firefox 2.0 was also released. The browser became a standalone application from the OS for the first time.

Offering increased standards support for web standards, IE8 was beta released in March 2008 and also introduced some new features such as Web Slices and anti-phishing tech.

IE9 will be faster, smoother and better at CSS, says Microsoft. Get the lowdown on the new version of the browser.