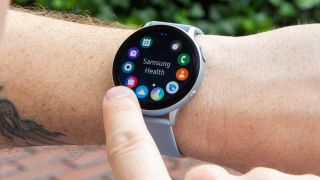 Samsung's latest smartwatch is now on sale in various markets around the world, but until today it has had it's best feature turned off by default.

Now a software update to the Galaxy Watch Active 2 has turned the touch bezel feature on by default.

That means it will be ready to go straight out of the box and you won't need to manually turn the feature on within the settings.

The touch bezel is a big selling point of the company's smartwatch as it allows for a speedy way to navigate the watch without making it bigger like the physical rotating bezel on the original Galaxy Watch.

Samsung has yet to confirm why the feature was originally off by default, but it's clear the company has made the decision to change that for those buying the device soon.

While it's this that's the big change in the update, you'll also get bug fixes, along with improvements to GPS and a more accurate battery indicator.