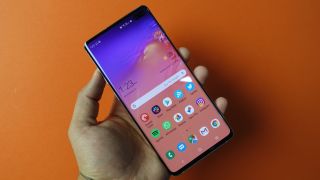 The Galaxy S10 Plus, above, is expensive, but the S20 Plus could cost a lot more (Image credit: Future)

It’s a generally accepted fact that Apple’s top-end phones are more expensive than top-end Android handsets, but Samsung could be looking to close the gap if leaked prices for the Samsung Galaxy S20 range are to be believed.

Shared on Twitter by Max Weinbach (a leaker with a good track record) and sourced from someone who has apparently proven more accurate than others, the prices are for the UK and include both 4G and 5G models.

And that £799 price is just for the 4G model of the Galaxy S20. Add 5G and it apparently comes to £874, which might amount to around $974, as Samsung tends to add around $100 to US price numbers over UK ones. Australian prices meanwhile are slightly less predictable.

Then there’s the Samsung Galaxy S20 Ultra. This is rumored to be the top model in 2020 and is only listed with 5G. For that you’ll apparently pay £1,149 (possibly $1,249), which is exactly the same as the UK starting price of the iPhone 11 Pro Max and potentially higher than that phone’s $1,099 starting price in the US.

Now, Apple’s phone can get even more expensive if you up the storage, and it’s not clear whether that will be an option with the Galaxy S20 Ultra, but Samsung would certainly be coming close to Apple's level if these prices are accurate.

And that's Apple's most expensive phone - while the rest of the Samsung Galaxy S20 range doesn't line up quite as neatly with the pricing of the rest of the iPhone 11 Pro range, the prices as a whole look to be similarly high.

We’d certainly take all of these prices with a pinch of salt, especially as Weinbach notes that prices can always change, but this close to the February 11 announcement of the phones we’d expect prices to be set. We’ll know the truth soon.