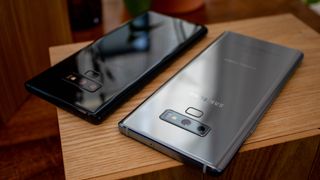 Samsung’s flagships usually impress on the camera front, and the Samsung Galaxy Note 10 range likely will be no exception, with the latest rumors pointing to ‘Smart ISO’ and ‘AI-ISO’.

These two terms were trademarked on July 23, 2019, then spotted by LetsGoDigital, and while the Samsung Galaxy Note 10 wasn’t specifically named in the trademarks, this close to its August 7 launch there’s a high chance that these features are intended for the phone.

But what exactly is ‘Smart ISO’ or ‘AI-ISO’? Well, we can mostly only speculate for now, but from the names it sounds like the ISO would be AI-powered, likely allowing it to adjust automatically based on what you’re shooting, and potentially meaning that it can learn your preferences over time, so the phone is better able to automatically select an ISO you’re happy with.

ISO is the measure of how sensitive the camera sensor is, which is useful for 'seeing' extra light or colors.

That could particularly help improve low light shots, where a higher ISO than you might normally select can be beneficial.

LetsGoDigital additionally speculates that this focus on ISO might mean that the Galaxy Note 10 range will offer a larger ISO range than the 50-800 offered by the Samsung Galaxy S10 range. That’s a believable theory, given that rival handsets such as the Sony Xperia XZ2 Premium and Huawei P30 have a far larger range, but it’s just speculation for now.

Regardless, with other rumors pointing to the Galaxy Note 10 Plus having five rear cameras, the standard Note 10 having three, and both phones having all sorts of new features and improvements, they should have snappers worth shooting with.

We’ll know for sure soon, as we're expecting Samsung's next range of devices to launch on August 7.