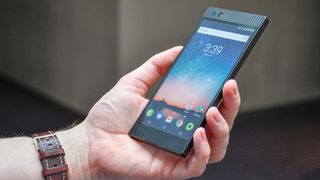 The Razer Phone only launched in November last year but talk is already turning to the Razer Phone 2, which could apparently land in September.

That’s according to an “internal source” speaking to FrAndroid, and while they didn’t get more specific than that, IFA 2018 takes place at the beginning of September, so that would be an obvious launch location for the phone.

Though it would also be less than a year after the Razer Phone’s launch, so take this rumor with a pinch of salt.

The source didn’t reveal any details of the Razer Phone 2 – and this far out they may not have been settled on anyway, but given that even the original Razer Phone has 8GB of RAM, a Qualcomm Snapdragon 835 chipset and a QHD 120Hz display, the next model is bound to be cutting-edge.

More than just a phone

What the source did say is that Razer might also turn Project Linda into a real product. This is a laptop that you slot the Razer Phone into, using the phone to power it and become a touchpad. It was demoed at CES 2018, and it would make sense for Razer to launch it alongside a new handset.

Indeed, in a tweet Razer’s CEO Min-Liang Tan has hinted that the device could get a commercial launch. If it does, it would give the likes of Samsung’s Dex a real run for its money.