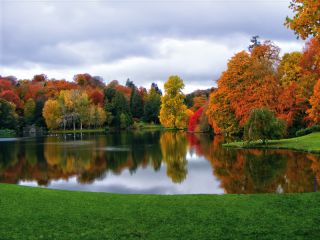 A nice photo of Stourhead in Wiltshire. Or is it?

Like it or not, photographic manipulation is now easier and the results better than ever before. Usually, the alterations are fairly benign - removing red-eye or fixing the light balance, for example - but sometimes the change is designed to affect our emotions and our understanding.

Given that we're bombarded with images throughout the day, how can we teach ourselves to recognise the fakery when we come across it?

Faked images have been with us since the start of the photographic era. Who can forget the five photos of the Cottingley Fairies from 1917 that duped the author of Sherlock Holmes, Sir Arthur Conan Doyle?

With today's cynical eye, the photos are amateurish - laughable, even - but they did fool a lot of people for some time. Sceptic James Randi came up with the proof in 1978: the fairies were traced from drawings in Princess Mary's Gift Book (a publication from 1917) and mounted on cardboard.

Back in the pre-digital days, modifying photographs by removing existing artifacts or adding elements that weren't there was hard work. There were therefore more photos where the fakery was due to a staged subject (Robert Wilson's infamous 'Surgeon's Photograph' of the Loch Ness monster, or Robert Doisneau's famous 'Le Baiser de l'Hôtel de Ville' rather than a deliberately altered original (like Yevgeny Khaldei's 'Raising a Flag over the Reichstag', where the smoke was enhanced and a (presumably looted) watch on a soldier's wrist was edited out of the picture).

However, as soon as programs like Adobe Photoshop arrived on the scene and digital cameras became affordable enough for everyday use, the propensity for digital manipulation of photographs took off.

Alongside this explosion of digital photography, we saw the creation of a specialised field called digital forensics, which attempts to uncover instances of deliberate falsification in digital images. It's important to remember that photos are often altered for simple aesthetic reasons.

When taking a photo of a group with a flash, it's pretty certain that some of the people will exhibit what's known as 'red-eye', where the light from the flash is reflected off the retina and seen in the image as a red spot on the pupil. This is simple to fix (change the colour from red to black), and many photo-editing programs include this functionality as a matter of course.

Many modern cameras are also able to manipulate images to remove red-eye, alongside their capability for face-detection.

Another popular visual fix for photos is to crop the image to remove any jarring or distracting elements along the edges. That way the viewer's attention is concentrated on what the photographer wants to say with the picture rather than extraneous detail. This is hardly a problem unless, for example, the picture is of a house for sale and the cropping removes the derelict car in the neighbour's drive.

Of course, all these changes are fairly benign in the grand scheme of things, and I'm sure we've all been guilty of them to a greater or lesser extent. How about this next one: using the clone brush in your favourite photo editor to remove that intrusive telegraph pole and wires from an otherwise perfect landscape? Yes, guilty.

Professor Hany Farid, of the Department of Computer Science in Dartmouth College in New Hampshire, has been researching how we can visually spot changes in photographs. Although we as humans are extremely good at face recognition, quickly understanding a scene, and determining direction and speed of motion, it turns out we're worse at spotting problems with lighting and shadows, and distortions caused by perspective.

This is somewhat unfortunate, since the first step in judging the authenticity of a photograph is to check shadows, lighting and perspective. Since our visual acuity is easily fooled, we have to pay attention.

Take, for example, the rather disturbing 'Accidental Tourist' photo that made the email rounds just after 9/11. It purportedly shows a man standing on the observation deck just before a plane hit one of the World Trade Center towers, but if you can avoid the initial sense of horror this creepy photo gives you and look at it more carefully, you'll start to notice incongruities in the various shadows.

For example, both the plane and the man are 'nose-on' in perspective. The man has some very sharp shadows on his face - dark enough that it's hard to determine any details about his right side - yet the plane looks as if the sun is directly overhead: there are virtually no shadows on the upper surface. So, our initial revulsion means that we don't pay attention to the clues that indicate fakery in the image.

Professor Farid points out that there is a simple technique for detecting incongruities with regard to shadows. Because light travels in a straight line, you can easily draw a straight line between a point on an object being lit and the same point on its shadow. Extend the line in the direction of the light source. All such extended lines in an image should meet at some point, or in the case of the sun, should all be parallel to each other.

The problem is finding some obvious point of the object and the same point on its shadow.

Another technique that can help you identify manipulated photos is to look at highlights. Are the highlights on surfaces all 'pointing' in the same direction as the assumed light source? A line perpendicular to any highlight's surface should point towards the light source.

If you notice that these perpendiculars are pointing in different directions, something's not right. Of great use here are the highlights in people's eyes: if you zoom in, these highlights should all be in the same direction.

When you're looking for altered photos, also keep an eye out for obvious repetitions in the image. One of the most famous examples of this (mainly because it got past the photo desk at Reuters with no problem before being called out by the world at large) is the photo by Adnan Hajj of smoke over Beirut after an Israeli bombing raid. The smoke from two separate plumes shows distinct patterns of duplication, probably through use of a cloning tool; it's so badly done, it looks obviously fake.

Professor Farid is trying to extend this type of visual check into a software tool that tries to spot cloned cells (that is, blocks of copied pixels) in a photo.

The images we see online are usually in JPG format. This format is extremely popular, mainly because of its small file sizes and near-universality. Many point-and-shoot cameras only record their photos in JPG format, but larger more expensive DSLRs have an option to save images in either RAW or JPG format (or both at the same time).

The most important point to understand about JPGs is that they're compressed to create the smallest possible file sizes. Not only that, but the compression used is a lossy format; in other words, the image we see in a JPG file is not exactly the same as the original photo, because some information has been discarded.

If you like, information is averaged out in a strict mathematical way to make the image data more compressible. What this means is that, although a JPG file is a very close representation of the original image, it's not quite the same. If a JPG is then saved again, the errors caused by the compression format are multiplied and become even more visible. A third-generation JPG is even worse.

This is why the recommendation when you're editing a photo is to only work on and change the original image (and use 'Save as', of course). Never work on a second or third-generation JPG - the smearing will become obvious quite quickly.