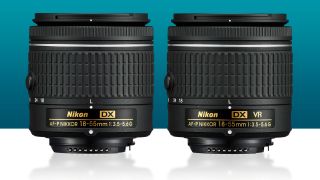 Almost all DSLR lenses are built for stills photography. They use autofocus motors designed to get the lens to the right focus point as quickly as possible, even if that does mean they make a bit of noise doing it.

That's not to say Nikon's existing AF-S technology is noisy – far from it. But even though its Silent Wave motors are smooth and quiet, they still produce operational noise that you'll hear in video clips. Not only that, refocusing in video needs to be smooth rather than fast, and quick 'snap' changes in focus don't look good.

Canon's stepper motor STM lenses are designed to get around this, and now it looks like Nikon is following suit with its own Stepping Motor autofocus technology.

AF-P is the designation used to distinguish these new lenses from Nikon's existing AF-S models. The full model name is 'AF-P DX NIKKOR 18–55mm f/3.5–5.6G' and the only difference between the two new AF-P models is that the cheaper lens does not have Nikon's VR image stabilization system.

Both lenses have a retracting mechanism that saves space and bulk when they're not being used. This was first seen on the 18-55mm VR II lens that first appeared with the Nikon D3300. But Nikon's also saved weight and bulk by ditching the AF/MF and VR switches on the lens barrel. Instead, these options are set via a menu on the camera body.

Nikon says this is a good thing because it means you won't accidentally change the lens settings through clumsy camera handling, but it could also be interpreted as a bit of cost saving – and it does lead to an additional complication. These controls will be available only on the Nikon D3300, D5300 and D5500 models, and even these may require a firmware update.

It's not the first time Nikon has created additional complications by cutting back on physical features – its D3xxx-series and D5xxx-series DSLRs dropped the autofocus drive mechanisms built into the body on other models, so you are restricted to lenses with autofocus motors built in. Most modern lenses do have AF motors, but some older and still useful lenses don't.

The new lenses are made for Nikon's DX format cameras and priced pretty keenly, though most users are likely to get them as part of a kit.