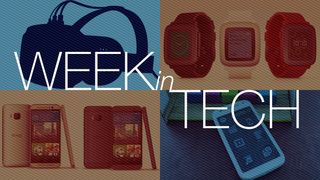 If you listen carefully you'll hear a whooshing sound. It's the sound of faraway planes, trains and automobiles carrying hundreds of hacks to Barcelona, because next week sees the biggest event in the mobile tech calendar: MWC 2015. Inevitably that means lots of leaks, stacks of speculation and tantalising teasers – so we already know about some of the most exciting new kit that'll launch next week. Not only that but we've got Steam in VR, a superb phone at an unbelievably low price and a completely baffling thing that the record industry is doing. It's enough to make Madonna fall down some more stairs.

Whether by accident or design, the Samsung Galaxy S6 has been leaking for weeks - and the latest leaks include photos of it and its Galaxy Edge sibling in actual use. It doesn't look dramatically different from the Galaxy S5, although if you look carefully you'll notice the slimmer bezel, metal frame and glass back. Apparently it "feels solid as heck".

The S6 will launch just in time for this year's Mobile World Congress, aka MWC 2015. It's the biggest date in the smartphone calendar, and we're expecting to see some more showstoppers including the HTC One M9 and some interesting things from Microsoft. Did someone say HTC One M9?

HTC's made a new One

What's the difference between the HTC One M8 and the HTC One M9? If you answered "one" you'd be right, but there's more to the new flagship than a slightly different number. The UltraPixel camera is now on the front for selfie-related shenanigans, there's a 20MP rear camera and the Boomsound speaker are apparently even more boomy. We'll find out more next week.

The Xperia Z4 tablet was supposed to stay secret until MWC, but Sony's accidentally (we think) leaked it: an image of it appeared on the official Xperia Lounge app, and Sony didn't spot the leak or yank it quick enough. All we know so far is that the tablet will have a "stunning 2K display", but the lack of words such as "compact" suggest it'll be a fairly big device. Other hints include "latest ultra fast processor" and "industry leading battery performance", which makes us think there'll be a Snapdragon 810 in there. We can't wait to find out more.

We mean Moto Es, of course. The new 2015 Moto E is really important, not because of its specs – which are pretty good – but because of its price. The 2015 version is just £109.99, and for your money you're getting a pretty good smartphone running Lollipop. That makes it a serious rival not just to other phones, but to MP3 players and media players too.

Who watches the watch men?

We do, and this week we're watching a brand new watch: the Pebble Time, which hit its Kickstarter target faster than you can say "Apple Watch and Android Wear rival". With seven-day battery life, a super-low price and both iOS and Android compatibility, it's an easy sell.

Meanwhile at the other end of the financial universe, Apple appears to be making a watch for the famed 1%: it looks like the gold Apple Watch Edition will cost more than many people's cars. The figure of $10,000 is being widely quoted, but it might cost even more than that. Better start saving…

Gotta get down on Friday

We thought this one was an April Fool, but it's far too early for that: starting later this year, all new music will be released at 12.01am on a Friday. As Ian Morris explains, "It will benefit artists who communicate with fans on Twitter, but who, apparently, aren't capable of talking about any time that isn't midnight Friday." We're as baffled as you are.

Fancy Steam on your face? It's coming: Valve has announced that it'll be showing off its Steam VR system at this year's GDC event alongside its Steam Machines and "new living room boxes". Let the Half-Life 3 rumours commence! Again!