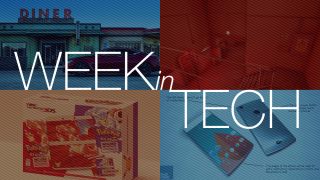 Our week started sadly with the news that David Bowie has returned to his home planet. In the obituaries, one thing that stood out was how prescient the Brixton Spaceboy was when it came to tech, predicting the mass influence of the internet and even founding his own ISP. And so as one visionary departed, the tech world carried on evolving this week: concept tech has made it into the real world in everything from gadgets to autonomous cars, Robot Wars is coming back to our screens and we discovered the secret codes that can turn anybody into a Netflix ninja. Ground control to Major Tom: it's week in tech!

It's nearly time for the Mobile World Congress, when we get to see many smartphone firms' new flagships. Naturally that means things are starting to leak already, and some of the most interesting leaks concern the LG G5. If you're fed up with me-too smartphone design then LG could make you happy: according to some reports, LG's G5 might have a really unusual design that incorporates a unibody metal back, a curved screen that curves vertically rather than horizontally, and a pop-out section that makes swapping the battery rather like swapping a big SIM card. We've had a go at imagining how that will actually look, and we're hoping LG will fulfill our dreams.

CES and cars, oh my

We've seen two big shows this month: consumer electronics bonanza CES, and the Detroit Motor Show. But what have we learnt? Joe Osborne reckons CES was about refinements and realisations, not revelations – and that's good, because CES offered us "the promises of the last few years' shows finally realized. This year's CES proved that ideas like 4K TV (with content to match), autonomous (or just cooler, approachable) robots and drones, (decent) virtual reality and electric vehicles (with realistic range and price) aren't the tech of years to come, but this year."

Meanwhile at the Detroit Auto Show we saw the latest, greatest in-car tech: BMWs packed with collision and pedestrian-avoiding sensors, the Chevy Bolt electric car, a whole bunch of cars running Apple's CarPlay and autonomous-ready Mercedes E Classes. As with CES, it's tech we'd seen before in concept form, but this year we saw the tech in production cars, not concept cars.

Baby, you can't drive my car

Remember all those jokes about driverless cars crashing because ho ho ho technology? It's time to dust them off again, because new figures show that Google's self-driving cars aren't quite ready to take the wheel full time. According to a report filed with the California Department of Motor Vehicles (DMV), in the last 14 months Google's cars have narrowly avoided 13 crashes and had to revert to manual control 341 times. When you consider that the 49 cars have collectively driven half a million miles it's actually quite a low failure rate, but it does show that humans are still needed behind the wheel.

Do you know your Shunts from your Sir Killalots? If you do, it's time to do a happy robot dance to the news that Robot Wars is coming back to UK TV. After a 13-year break, the big robot barney program is going to return to our screens, and it'll be filmed in a custom-made, "bullet proof" arena in Scotland. That's the good news; the bad news is that Craig Charles hasn't been confirmed as the host, and some Twitter users are suggesting Danny Dyer would be a good host instead. Those people are THE PEOPLE OF WRONG.

According to the latest numbers from industry watchers IDC, PC sales continued to slump in 2015 – and the slump was the largest year-on-year decline to ever hit the PC market. Global shipments dropped by 10.6%, partly due to competition from tablets and mobile devices and partly because PCs don't become obsolete as quickly as they used to. There's one bright spot, though: sales of 2-in-1 PCs such as the Microsoft Surface Pro 4 are on the up, and they're predicted to do even better in 2016.

Be a Netflix ninja

Listen. Do you want to know a secret? Do you promise not to tell? OK then. Netflix has a whole bunch of secret codes you can use to find categories such as "Anime Sci-Fi from the 1970s," "Goofy crime comedies from the 1940s" or "Independent coming-of-age dramas based on books." As Michelle Fitzsimmons explains: "There are codes for films broken down by decade, actor, director, country of origin, and much more. Once armed with the codes, you'll save time searching for just the flick to fit your mood or find a new TV show that strikes your particular fancy." And of course she's explained how to get the codes too.

If there's one classic game everybody wants to see remastered it's GoldenEye, the legendary N64 shooter – but unfortunately licensing issues have prevented it from reappearing in remastered form. Hurrah, then, for modder Jude Wilson, who's rebuilt the famous Facility map using the Unreal 4 engine. It looks – and thanks to its incredible soundtrack, sounds – brilliant.

A new Nintendo 3DS is coming – and it's powered by Pokemon. The new 3DS will come with two faceplates featuring Charizard and Blastoise, and it'll have Pokemon Red, Blue and Yellow installed as well as a special menu theme. We've known about the game remakes for months, but the branded bundles are a nice touch. As Nick Pino explains: "The systems and the re-release of the games themselves are in celebration of the series' 20th anniversary of when it launched in Japan, and are part of a larger year-long celebration similar to Nintendo's 'Year of Luigi' campaign that it ran in 2014."