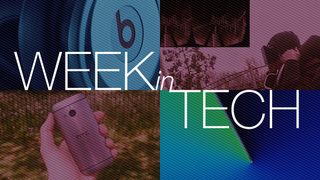 Sometimes truth is stranger than fiction. Who could have predicted that Dr Dre would end up working for Apple, that someone would use virtual reality on a rollercoaster or that Samsung would have lots of ideas that sounded awfully like other firms' ideas? OK, last one aside, it's been quite a weird week in tech.

What's small and has a stupid name? No, not Will.i.am - we're thinking of the HTC One Mini 2, which can sound even sillier if you get the One Mini 2 on Three 4G (you can blame Twitter wags for that one). The good news is the handset is much more sensible than the name: according to John McCann, "it gives the iPhone 5S a run for its money," because it's really just a shrunken version of the HTC One M8.

It's time to say hello to the latest addition to the Motorola family: the Moto E, which might be short for "Eeeeees really cheap." At just £89 SIM-free (around $150, AU$160) it's incredibly cheap, but that doesn't mean it's incredibly nasty: our Mr McCann says it's "a desirable smartphone with an impressively low price tag and a decent set of specs… you won't find a better offering at this price".

Earlier this year we said that Xbox One's compulsory Kinect was a gift to Sony. This week Microsoft admitted defeat and promised a cheaper, Kinect-free Xbox One. That's not the only Xbox U-turn, either: the Microsoft tax, which meant you couldn't use your favourite streaming service without a Gold account, is getting dumped too.

No, of course not - but he's about to become one of Apple's top people. In news that surprised almost everyone, Apple is buying fashionable headphone company Beats Audio for $3.2 billion, which is the price of two pairs of Beats headphones. Why Beats? We reckon it's a talent buy based on getting Beats' curation skills and Beats headphones' co-founder, music biz legend Jimmy Iovine.

Now everyone can be a Glasshole

Google Glass is for early adopters no more: now anyone who's daft enough to drop $1,500 on Google's smart specs can get a pair, as long as they're in America. Their new-toy joy might not last, though: Glass 2 is already in development.

With just weeks to go before Apple's WWDC, iOS 8 rumours are flying thick and fast - and the most interesting one is that iPads are going to get split-screen multitasking, just like a certain tablet whose name rhymes with "furface". iOS 8 might also introduce HD audio playback, although if you're using Apple's earbuds we're not sure you'd notice the difference. Maybe Apple should buy a headphone company or something.

(E)3 is the magic number

It's nearly E3 time, and we're excited already. As Lily Prasuethsut reports, this year's show is likely to be VR-tastic - and it'll also feature Valve's Steam Machines, the new Halo game and possibly the Halo TV programme too. Here's hoping 2014 is the year Nintendo levels up and recovers from the relative disaster of the Wii U.

Samsung has invited us to its "Galaxy Premiere 2014" to see the new Samsung Galaxy Tab S line. But that's not all: Samsung has also invited journalists to a health-focused event this month, which is in no way an attempt to spoil HealthBook in iOS 8. Samsung is also planning to launch a Google Glass rival later this year, and now that Dre's joined Apple, Samsung plans to sign Death Grips. We made that last one up.

Space on your face

Hands up who saw Oculus Rift and thought "man, that'd be great on a rollercoaster!" No, us neither - but that's exactly what one enterprising pair did this week when they sneaked a VR headset and laptop onto the fairground ride. The reason? So they could experience a virtual version of the rollercoaster… IN SPACE!