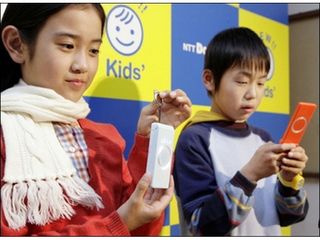 DoCoMo's latest phones are aimed at keeping parents informed about the whereabouts of their children.

The latest research on the mobile phone habits of Japanese children may be music to the ears of phone providers, but the depth to which the gadgets have penetrated the lives of the young there is bound to set alarm bells ringing elsewhere.

According to a government survey from December 2007, not only do a massive 96 per cent of high-school students carry their own phones, but they also spend surprising amounts of time using them each day and are increasingly shying away from real-world contact in favour of the virtual version.

The study shows that high-school girls average aver two hours a day on their phones, mostly reading e-books, sending email and listening to downloaded music, while boys of the same age are clocking up over 90 minutes a day.

We already know plenty about the Lord-of-the-Flies world of cyber bullying, where cycles of abuse spiral out of control as retaliating in kind is often the only response available, but the impact of the mobile phone on families remains little explored.

Findings from the Japanese study reveal a correlation between phone emailing and happiness at home. Asked if they send more than 20 mails a day, kids who do so are almost twice as likely to be unhappy at home.

Whether or not the link is direct is impossible to prove without more work, although it's not hard to see the mechanisms of disconnection and isolation at play.