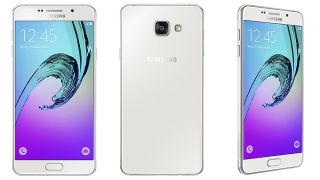 Samsung's new Galaxy A7, Galaxy A5 and Galaxy A3 have just been announced, but there's going to be quite the wait to get your hands on them.

The phones are first coming to the UK but not until April 2016, and the wider world could have to wait a little while longer as well. Samsung has said it will be 'expanded to global markets', which could mean a launch even after April next year.

At least the specs are half-decent: the top-of-the-line Galaxy A7 comes with a 5.5-inch Full HD Super AMOLED display, a 1.6GHz octa-core processor, 3GB of RAM and a 3,300mAh battery.

A long way off

The middle sibling of next year's A family is the Galaxy A5 with a 5.2-inch Full HD display, 1.6GHz octa-core processor, 2GB of RAM and a 2,900mAh battery.

All three phones are running Android 5.1 Lollipop software, which is a shame when we'd expect it to launch with Android 6 Marshmallow given Samsung will have had the platform for months by then.

Each is also packing a 13MP rear camera and a 5MP selfie shooter, with 16GB of internal storage on each (plus microSD support up to 128GB) and Samsung's fast charging abilities on both the Galaxy A7 and Galaxy A5.

The A5 and A7 will also support Samsung Pay mobile payments thanks to the fingerprint sensor integrated in the phones.

The strange thing is that release date though, as April is a long way off and we've got both CES and MWC in between now and then.

Rumours suggest the Galaxy S7 will be announced at some point in February, so we may even see the flagship phone out on the streets before this new range.