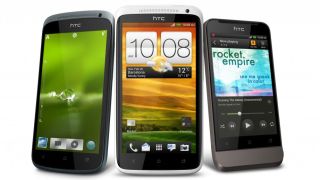 Can this trio of handsets topple the rest?

HTC's new range of handsets have been well received, but the company is still struggling to match its sales from last year.

There was a very strong start for HTC last year as it made record revenue in six straight months, but Samsung and Apple both fought back and pushed the Taiwanese manufacturer down the sales charts.

It only gets tougher

The flagship One X, along with the One S and One V, are the phones tasked with getting HTC back to the top in the mobile game, but they have a real fight on their hands.

Samsung unveiled its Galaxy S3 handset last week, hitting stores on May 30, and if demand is anything like its predecessor the Galaxy S2, this next-generation mobile will fly off the shelves.

We also expect to see the iPhone 5 grace us with its presence later this year, followed by a slew of Windows Phone 8 Apollo and BlackBerry 10 devices which leads to one truly congested market.

Who will come out on top? Well it's a tough one to call. Let us know your thoughts in the comment box below.