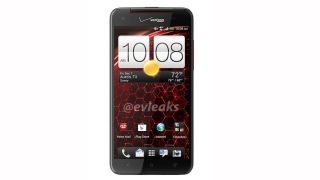 Is greatness in its DNA?

HTC is readying a 5-inch mobile-cum-tablet for the western market, and here's what appears to be its first official photo.

The HTC DNA is a repackaging of the HTC J Butterfly, a challenger to the Galaxy Note 2 that only launched in Japan.

The specs are said to be nigh-on identical to the J Butterfly, with a 5-inch screen that has a resolution equal to a 1080p HD TV. With 1,080x1,920 pixels, the screen resolution will be an eye-popping 440 pixels per inch (ppi). To put that in context, the iPhone 5's retina display only manages 326ppi. So the DNA should look amazing.

If the spec list is correct, it should be a real challenger to the Galaxy Note 2's phablet crown. It should have an 8-megapixel camera on the back, capable of shooting 1080p video, with 16GB storage and 2GB of RAM.

A Qualcomm Snapdragon processor should be inside, powering things, and it should come with Android Jelly Bean 4.1 straight out of the box.

According to previous leaks, the DNA should be on sale in the US next month. There's no word of a European release as yet.

Samsung's Galaxy Note 2 has been a huge hit, selling 3 million units since it was announced in September. So the DNA could piggyback off some of that success.

HTC has been struggling of late, with profits down 79 per cent on the same time last year. October didn't prove any better for the Taiwanese company.